Civil rights groups advocating for Palestinian residents of the Israeli-controlled territories of the West Bank have accused the State of discriminating against villages seeking to expand.

For nearly two decades, a temporary agreement between Israel and the Palestinians has allowed the Jewish state to maintain full control of Area C, a territory that stretches across 62% of the West Bank and is inhabited by 50,000 Palestinians and over 300,000 Jewish settlers.

NGOs that include the Association for Human Rights in Israel (ACRI) and the Bimkom organization claim that the Civil Administration, which governs the territory, applies unequal policies to Palestinians and Jews in the area, branding the practice as a "zoning Apartheid." 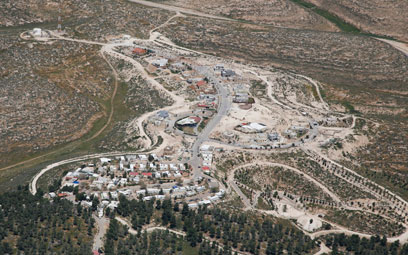 Settler groups deny the charges, saying that the claims are nothing but a cheap attempt to grab Israeli land.

Alon Lifshitz, an architect at Bimkom, an organization that promotes equal planning rights, has said the administration has approved hundreds of plans allowing for the establishment of new settlements and expansion of existing ones, while almost entirely barring Palestinians from developing their towns across Area C.

While the IDF has special planning committees for settlements, no such committees exist for the Palestinians. Palestinian planning councils were eliminated by the IDF in 1971, leaving the sector unrepresented in the army the managers their land.

"Some of the settlements prefer to build in areas located hundreds of meters away, thus seizing land and expanding even though they have space to build new homes near the existing ones," Lifshitz said.

Take for example the town of Sansana, which was initially presented as a neighborhood in the Eshkolot settlement even though it was located three kilometers away. Or the so-called neighborhoods of Alon and Nofei Porat, which were built at a distance of 700 meters and 500 meters respectively from their supposed base settlement, Kfar Adumim.

Meanwhile, applications for construction permits made in the '90s by residents of Cardala, a 320-strong village built between two larger towns, were denied by the Civil Administration.

Village of Cardala (Photo: Courtesy of Bimkom and ACRI)

Another attempt to obtain planning authorization, led recently by the ACRI, failed as well. The administration claimed that Cardala was ineligible for expansion because it was located within 500 meters of the larger town of Bardala, which still has land suitable for housing, as does the nearby Tel al-Baida.

"The administration's response is unacceptable," said Attorney Raghad Jaraisy of ACRI. "This is not a new village, but one that already has water and electricity infrastructure. The administration has a duty, as per the international humanitarian law, to protect the lives of the occupied territory's residents, and to make changes in a manner that would raise their quality of life."

The Rabbis for Human Rights organization has recently petitioned the High Court of Justice to restore the Palestinian rights to build in Area C. The matter has also drawn criticism from the international community, with the European Union issuing damning reports over what it claims are discriminatory policies.

The Civil Administration refused to comment, but the Regavim organization, which monitors Palestinian construction in the West Bank, dismissed the rights groups' claims as "devoid of truth." If discriminatory practices exist, the organization's representatives said, they are directed against the Jewish settlers in the area. While the planning procedures for Israelis are marred in length bureaucracy, special regulations speed up the process for Palestinians.

"The claims made by ACRI and Bimkom are nothing more than cheap demagoguery and a cynical attempt to abuse international law to aid the Palestinians to take over more land in Area C."

"The groups should reveal the true political motives behind their actions instead of hiding behind the false premise of concern for human rights," he added.