And the Palestinian Authority in charge of the West Bank issued its own congratulations to Morsi, who is set to become Egypt's first post-uprising president.

Senior Hamas official Mahmud Zahar told AFP that the victory was "a historic moment and a new era in the history of Egypt," as Gazans cheered and fired volleys of celebratory gunfire in the streets of the Palestinian territory.

The Hamas Islamist movement that rules the Gaza Strip has long-standing ties with the Muslim Brotherhood, and grew from the Egyptian organization that saw its candidate win 51.73% of the vote to defeat ex-prime minister Ahmed Shafik. 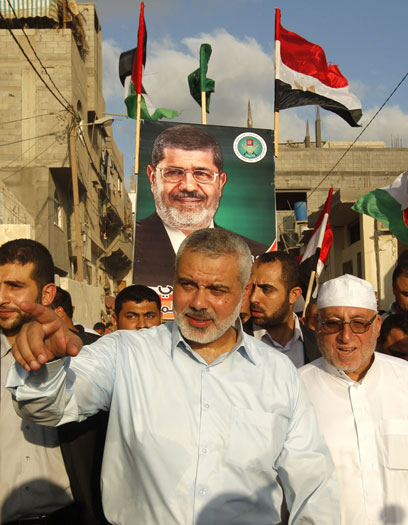 Zahar called Morsi's victory "a defeat for the program of normalization and security cooperation with the enemy," referring to Israel.

Hamas Prime Minister Ismail Haniyeh phone Morsi to congratulate him on the victory and expressed hope that his presidency would bring stability and security to the Egyptian people.

The terror group's foreign minister, Mohammed Awad, said the victory signaled a "clear victory for democracy in the region," adding that Morsi's victory would "directly influence the Palestinian people."

Hamas spokesman in Gaza Fauzi Barhoum said the Egyptian election results constitute a "historic turning point for Egypt." The election results will "define the future of the Palestinian issue," he predicted.

"We congratulate Doctor Mohamed Morsi, the Muslim Brotherhood candidate, on his win in the Egyptian presidential elections, and his election as president of Egypt," Palestinian negotiator Saeb Erekat told AFP. The Palestinians have closely watched Egypt's post-uprising transition, with Hamas hailing the rise of its traditional ally the Muslim Brotherhood, which also won a majority in Egypt's parliamentary elections.