In his first address to the nation, just hours after being declared Egypt's new president, Islamist Mohamed Morsi pledged to "preserve international accords and obligations"  - a reference to the peace deal with Israel.

However, Morsi did not specifically mention Israel or the 1979 peace treaty.

In a televised address, the Muslim Brotherhood member, who defeated former President Hosni Mubarak's last Prime Minster Ahmed Shafik in a race that raised political tensions in Egypt to a fever pitch, said "we are sending a message of peace to the world. "We'll establish balanced relations with all of the world's countries on the basis of common interests," he said, while promising to be "the president of all Egyptians – Muslims, Christians, the elderly, children, women, men, farmers, teachers, workers, those who work in the private and public sectors, and the merchants." 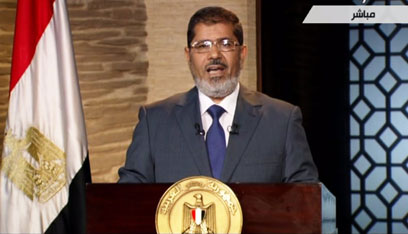 Morsi paid tribute to nearly 900 protesters killed in last year's uprising, saying without the "blood of the martyrs," he would not have made it to the presidency.

"With their blood the planted the tree of freedom," he said. "I wouldn't be here today as the first freely elected president without the sacrifices of the martyrs."

Morsi also praised the Egyptian military and justice system, which he said must remain independent from the executive and legislative branches."

In a non-confrontational speech, he did not mention the last-minute power grab by the ruling military that stripped the president of most of his major powers.

Morsi was declared the winner Sunday in Egypt's first free presidential election in history, closing the tumultuous first phase of a democratic transition and opening a new struggle with the still-dominant military rulers who recently stripped the presidency of most of its powers.

In Tahrir Square, the birthplace of the uprising that ousted autocratic President Mubarak, joyous Morsi supporters wept and kneeled on the ground in prayer as soon as they heard the outcome announced live television. They danced, set off fireworks and released doves in the air with Morsi's picture attached in celebrations not seen in the square since Mubarak was forced out on Feb. 11, 2011.

Shafik congratulated Morsi on his victory.