Warning from Putin: Visiting Russian president cautions Israel against hasty military action in Iran, says 'look at what happened to the Americans in Iraq and Afghanistan'

President Vladimir Putin expressed his reservations over the prospect of a military strike in Iran, urging Israel Monday to learn from negative US experience in Afghanistan and Iraq.

Putin's comments were made in a meeting with Shimon Peres in Jerusalem, after Israel's president asked the visiting leader to speak out on the Iran issue.

"Look at what happened to the Americans in Afghanistan and in Iraq. I told Obama the same thing," the visiting president said in a meeting with his Israeli counterpart, cautioning against hasty military action. "There is no need to do things too quickly; one should not act without thinking first."

"Iraq has a pro-Iranian regime after everything that has happened there. These things should be thought out ahead of time before doing something one will regret later," he said. "One should not act prematurely."

Earlier in the evening, Putin said that his country "has a national interest in guaranteeing peace and tranquility for Israel."

The Russian president noted that the former Soviet Union supported the State of Israel's establishment, adding that his talks earlier Monday with Prime Minister Benjamin Netanyahu were constructive and pertained to the need to boost strategic ties between the two countries. 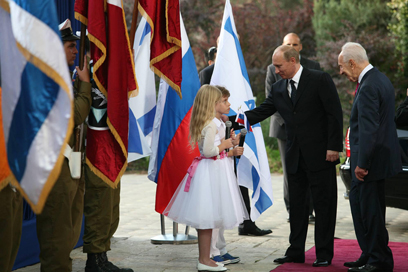 Speaking at a state dinner held for his Russian counterpart, Peres expressed his hope that Putin would contribute to the achievement of peace in the region, making note of his "warm attitude" towards the Jewish state.

Peres added that "the Iranian people are not our enemy. Israel does threaten their existence. It is Iran's current regime that indentifies itself as an enemy of Israel and a threat to its existence."

Israel and Russia agree that Iranian nuclear weapons would constitute grave danger for the Jewish state and for the whole world, PM Netanyahu said earlier Monday following his meeting with Putin.

"I believe that we should be doing two things now: Boosting the sanctions (on Iran) and also boosting the demands," Netanyahu said. 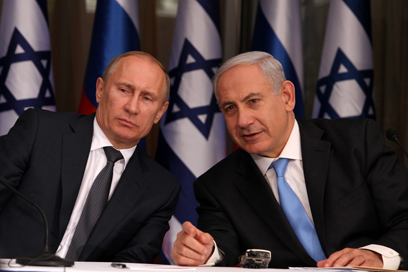 The Russian president said the two leaders "spoke in detail about the Syria issue and about the Iranian nuclear program."

"I would like to stress again that the negotiations were detailed and very effective," he said. "I'm convinced that the cooperation between Russia and Israel will develop later as well, and this matter certainly meets the demands and interests of both states, in the region and in the world at large."

Speaking to the media after meeting PM Netanyahu, Putin thanked Israel's leadership for inviting him to visit. 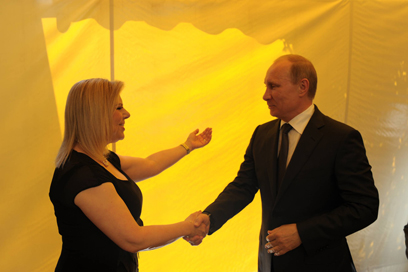 Earlier Monday, President Peres greeted Putin in a dedication ceremony for a memorial to the Red Army’s victory over Nazi Germany in Netanya. Peres said he is certain that Russia, which fought fascism, will not tolerate similar threats, "not an Iranian threat and not bloodshed in Syria."

The PM said that Israel "appreciates the democratic process in Egypt" and respects the Egyptian election results.

Meanwhile, President Putin addressed the Israeli-Palestinian conflict, asserting that "against the backdrop of events in the Middle East, it is important to resolve longtime conflicts."

"We urge all sides to renew negotiations; this is the only way to resolve the problem," the Russian president said.

Omri Ephraim contributed to the story