Women aged 74 to 90 to compete for title of most beautiful Holocaust survivor. 'At our age – we are not beauties, but we feel beautiful,' one of them says. Other survivors claim pageant 'in bad taste'

Chava already knows what she's going to wear, Haya says what matters most is internal beauty, Esther, the youngest contestant, craves the attention, while Jenia, the eldest, is just trying to enjoy the experience: Twenty women between the ages of 74 and 90 will compete for the title of most beautiful Holocaust survivor on Thursday.

During the beauty pageant, which will be held at the Ahuzat HaCarmel event hall in Haifa, each contestant will take the stage separately and share her Holocaust survival story with the audience. The winner will be crowned by former beauty queen Tamar Ziskind.
Jewish Convert
Holocaust survivor finds haven as Muslim in Israel
AFP
Leila Jabarin, formerly Helen Brashatsky, finally tells her eight children, 31 grandchildren about birth in Auschwitz: 'I hid my pain for 52 years'
Holocaust survivor finds haven as Muslim in Israel
"When I was a little girl no one took notice of me, but now everyone is interested," said 74-year-old contestant Esther Liber. "I'm not in it to win. I'm competing because it puts us all in a good mood and is a pleasant experience."

Chava Hershkovitz, 78, says "we will all dress glamorously. I'll be wearing a skirt and a pretty black blouse."

Chaya Caspi (78), who was born in Romania, says the contestants "are not competitive. We will congratulate the winner. What matters is internal beauty and helping one another.

"At our age – we are not beauties, but we feel beautiful. If we don't value ourselves, others won't value us either," she said. 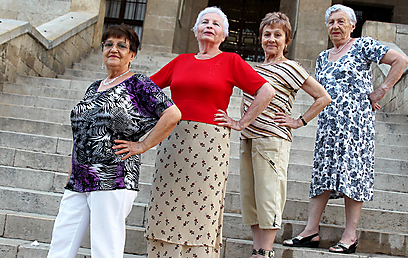 Jenia Schwartzberg, 89, the eldest contestant, chose to wear a gown she wore at her granddaughter's wedding two years ago. "I'll be pleased with whatever the judges decide. But if I win, I'll be very happy," she said.

Schwartzberg was born in Poland and fled to Russia, where she contracted Typhus, Malaria and Dysentery while dong hard labor and survived without any medication: "God wanted me to stay alive. I did everything I could to stay alive and tell my story. I was very lonely, but now I'm happy and having a good time." Despite the general excitement, some Holocaust survivors claim the event is in bad taste. One survivor, who resides in a small housing shelter in Haifa, says "we sit in the cafeteria at lunch and criticize the event."

But Eli Debi, director of the Lanetzach Achi (Brothers Forever) charity, rejected the criticism. "I've produced many events, but this one is special. The Holocaust survivors are happy and full of adrenaline. It's amazing."

The 20 contestants were selected from a pool of 500 Holocaust survivors who had originally signed up for the pageant, said Shimon Sabag, chairman of Yad Ezer L'Haver, which is organizing the pageant.