A UN Security Council committee has published a report on Iranian sanctions violations, including shipments of weapons to Syria in breach of a UN ban on weapons exports by the Islamic Republic.

The Security Council has imposed four rounds of sanctions on Iran for refusing to halt its nuclear enrichment program, which the United States, European Union and their allies suspect is at the heart of a weapons program. Iran rejects the allegation and refuses to halt what it says is a peaceful energy program.

The report appeared on the committee website on Thursday, diplomats told Reuters on Friday. The report, which Reuters reported on last month, said that Syria remains the top destination for Iranian arms shipments.

Iran, like Russia, is one of Syria's few allies as it presses ahead with a 16-month-old assault on opposition forces determined to oust Syrian President Bashar al-Assad. Western diplomats said they were pleased the report was made public. Initially they said they feared Russia would block it as it did last year's report on Iran, which has yet to be made public due to Russian objections. 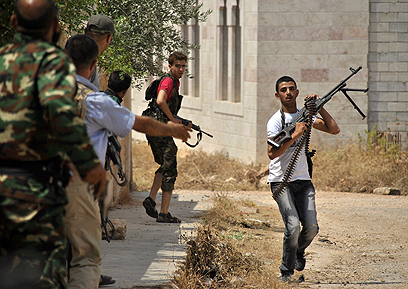 Publication of the report, the diplomats said, will likely add to the pressure on Iran to comply with UN demands about curbing sensitive nuclear activities as major powers press ahead with negotiations with the Islamic Republic aimed at convincing it that defiance of international sanctions will be too costly.

The new report, submitted by a panel of sanctions-monitoring experts to the Security Council's Iran sanctions committee, said the group investigated three large illegal shipments of Iranian weapons over the past year. "Iran has continued to defy the international community through illegal arms shipments," it stated. "Two of these cases involved (Syria), as were the majority of cases inspected by the Panel during its previous mandate, underscoring that Syria continues to be the central party to illicit Iranian arms transfers," the report said. The third shipment involved rockets that Britain said last year were headed for Taliban fighters in Afghanistan. The kinds of arms that Iran was attempting to send to Syria before the shipments were seized by Turkish authorities included assault rifles, machineguns, explosives, detonators, 60mm and 120mm mortal shells and other items, the panel said. The most recent incident described in the report was an arms shipment discovered in a truck that Turkey seized on its border with Syria in February. Turkey announced last year that it was imposing an arms embargo on Syria. The expert panel recommended adding three firms to a UN blacklist of companies that have aided Iran's nuclear or missile programs, or have helped it evade UN sanctions. The three firms recommended for blacklisting are airline Yas Air, SAD Import Export Company, and Chemical Industries and Development of Materials group. The report said Yas Air has been involved in illicit arms shipments to Syria. It was not clear when the Iran sanctions committee would make a decision on whether or not to add the three Iranian companies to the list of entities facing an international asset freeze and banishment from doing business worldwide. Earlier this year the US Treasury Department imposed US sanctions on Yas Air, which is an Iranian cargo airline, along with three Iranian military officials and a Nigerian shipping agent for supporting illegal arms shipments to the Middle East and Africa. The 67-page report also discusses Iran's attempts to circumvent sanctions on its nuclear program but notes that the four rounds of punitive measures the 15-nation council imposed on Iran between 2006 and 2010 are having an impact. "Sanctions are slowing Iran's procurement of some critical items required for its prohibited nuclear program," it said. "At the same time prohibited activities continue, including uranium enrichment." A similar UN report on North Korean sanctions violations was also made public on Friday.