Some 800 people staged a pro-Israel rally in front of the South African parliament building in Cape Town on Friday, after hundreds of protesters attended a similar demonstration the previous day in the capital, Pretoria.

The activists expressed opposition to South Africa's plans to stick "Made in the Palestinian Territories" labels on goods produced in West Bank settlements. The country's Trade and Industry Minister Rob Davies, who proposed the legislation, has argued that consumers must be informed of a product's origin, as is common practice in other parts of the world, including the European Union.

Israel Radio quoted Davis as saying that his proposal is based on information he received from pro-Palestinian groups headed by Open Shuhada Street. He granted the public 60 days to submit written opposition to the proposal. The government is to decide on the bill once the consultation period runs out on July 10. 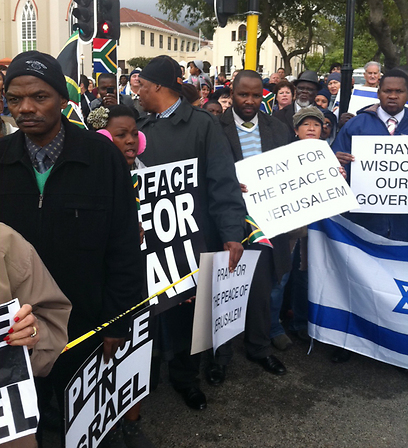 Israeli Ambassador Dov Segev-Steinberg met with representatives of the South African Foreign Ministry on Thursday to submit Israel's official response to the bill. He said that the proposal goes against the agreements reached between Israel and the Palestinians and compromises the bilateral ties between South Africa and the Jewish state.

The protesters in Pretoria, led by the African Christian Democratic Party, marched on the Trade and Industry Ministry to hand over a petition that counters the propsal. The South African Jewish Board of Deputies has submitted its own statement of opposition on Wednesday.

Zulu leader Mangosuthu Buthelezi, who heads the Inkatha Freedom party, attended Thurday's rally and said that the legislation goes against both Israel's and South Africa's interests. Alan Fischer, a representative of Jewish groups in South Africa, said that the wide array of protesters that attended the rallies in Pretoria and Cape Town indicate that Israel has many supporters in the country.