A US delegation of university presidents and chancellors has arrived in Israel on Sunday to for a conference aiming to explore opportunities for academic and research collaboration with Israeli institutions.

The delegation, which is to remain in the country until July 9, is set to learn about the latest state-of-the art research initiatives and study the unique academia-industry ties that have turned the Jewish state into the "Start-Up Nation."

The symposium, titled the University Presidents Seminar, is sponsored by Project Interchange, an educational institute of AJC (American Jewish Committee). 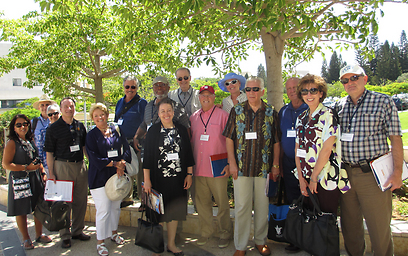 "Israel is a leader in technical innovation,” said North Carolina State University Chancellor Randy Woodson, who is taking part in the seminar. "Sharing information on the strong ties between higher education and industry will provide meaningful examples for NC State's continued efforts to support a strong economy in North Carolina."

California State University San Marcos President Dr. Karen Haynes added: "I look forward to learning more about how Israel has fostered national innovation and how that is developed and nurtured in its universities as lessons learned to bring home to my institution."

For the first time, a president of a historically Black college and university (HBCU) will be participating. Spelman College President Dr. Beverly Daniel Tatum heads America’s oldest HBCU for women.

The intensive seminar offers the group broad exposure to the complex issues facing Israel and the region; the delegation will meet with senior Israeli government officials and community leaders across the social and political spectrum, and will be traveling to the West Bank to meet with Palestinian leaders.

The delegation is also to visit Sderot to get a first-hand look at life under rocket fire. They group is to network with their counterparts at Tel Aviv University, Hebrew University and the Weizmann Institute, among others. Venture capitalist Jon Medved will share insights into what makes Israel the “Start-Up Nation.” Seminar delegation chair, University of California Davis Chancellor Linda P.B. Katehi, noted, “As chancellor of a top American public research university with a strong international presence and aspirations to build on our existing global relationships, it is important that that I have a deep understanding of Israel and its neighbors.

"From what I have been told by peers who have already participated in Project Interchange, the program is an excellent way to learn a great deal about Israel and its place in the ever-changing Middle East.”

Project Interchange Executive Director Sam Witkin branded the initiative as an opportunity to promote the academic ties between Israel and a wide cross-section of US campuses.

“The interest Israeli world-class research and educational facilities have generated attests to the country’s role as a global player in education and innovation,” he said.

The diverse group of academicians includes Dr. Louis Agnese, the president of the University of the Incarnate Word.

“I believe Project Interchange will allow me to gain a much better understanding of Israeli culture, especially from my position as president of the largest Catholic university in Texas,” He said.

"(…) I would like to explore reciprocal educational opportunities, which are known as sister school agreements… I’m a firm believer these types of opportunities allow students from diverse backgrounds to engage in positive dialogue that can help close the cultural gaps that often separate them."