Special envoy tells French paper that attempts to find political solution to escalating violence in Syria have proved unsuccessful; says Iran should be part of the solution

Special UN envoy Kofi Annan acknowledged in an interview published Saturday that the international community's efforts to find a political solution to the escalating violence in Syria have failed.

Annan told the French daily Le Monde that more attention needed to be paid to the role of longtime Syrian ally Iran, and that countries supporting military actors in the conflict were making the situation worse.

"The evidence shows that we have not succeeded," he said.

Annan, the special envoy for the United Nations and the Arab League, is the architect of the most prominent international plan to end the crisis in Syria, which activists say has killed more than 14,000 people since March, 2011.

His six-point plan was to begin with a cease-fire in mid-April between government forces and rebels seeking to topple the regime of President Bashar Assad. But the truce never took hold, and now the almost 300 UN observers sent to monitor the cease-fire are confined to their hotels because of the escalating violence.

Annan defended the unarmed observers, saying it was not their job to stop the violence, but to monitor the sides' adherence to the truce.

He offered few suggestions on how the plan could be salvaged; only saying that Iran "should be part of the solution" and that criticism too often focused on Russia, which has stood by the regime.

"Very few things are said about other countries that send arms and money and weigh on the situation on the ground," he said, without naming any specific countries.

Activists in Syria on Saturday reported fierce government offensives to try to retake rebellious areas outside of the northern city of Aleppo and near the capital Damascus, as well as government shelling across the country.

The Britain-based Syrian Observatory for Human Rights, which relies on an activist network inside Syria, called the bombardment of a number of villages in Aleppo province "the most violent" since the army launched a recent campaign to retake control of the area.

On Saturday, shells fired from inside Syria killed two Lebanese civilians and wounded 10 others, security officials said, in the latest incident of violence spilling across the border.

One woman was killed when a shell hit her home in the Wadi Khalid area of northeast Lebanon, also wounding five others. Another shell hit the nearby village of al-Hisheh, killing an 8-year-old boy and wounding his father and four other children. 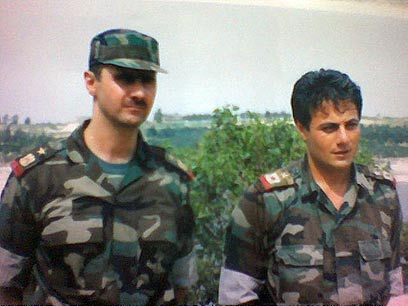 Assad and Tlass in better days

Despite mounting international condemnation, Assad's regime has largely held together. On Saturday, however, France announced the defection of Brig. Gen. Manaf Tlass, an Assad confidant and son of a former defense minister who helped ease Assad into power.

Tlass is the highest ranking official to abandon the regime so far, and Western powers and anti-regime activists hoped his departure would encourage others to leave, too.

News of the defection largely overshadowed an international conference in Paris on Saturday attended by the US, its European and Arab partners and members of Syria's fractured opposition.

The so-called "Friends of Syria" said they would provide means for the opposition in Syria to better communicate among themselves and with the outside world and increase humanitarian aid.

They also called on the UN Security Council to adopt a resolution that would force the regime to comply with the two peace plans that have been largely ignored by both sides in the conflict.

Syrian allies Russia and China would likely veto any resolution seen as too critical of the Syrian government, as they have in the past.