The head of the Islamist terror group Hamas in the Gaza Strip said on Friday he was confident Egypt's new president would shield the Palestinian enclave from Israeli attacks and fully open its borders to end a trade blockade.

Mohamed Morsi, who won power in last month's presidential election in Egypt, is a member of the Muslim Brotherhood and ideologically close to Hamas.

The Gazan Islamists long complained that his predecessor Hosni Mubarak, ousted from power last year in a popular revolt, sided not just with Israel, but also with their political rival - Palestinian President Mahmoud Abbas's Fatah movement. 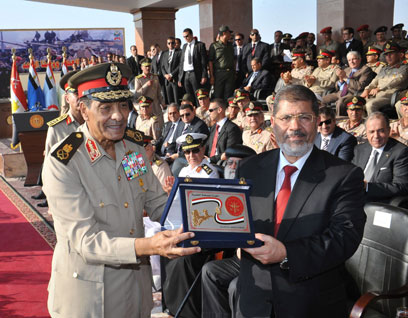 Low level violence continues and Israel still imposes a rigid trade blockade on Gaza, arguing that it is needed to prevent weapons of arms-making materials into the enclave.

Politicians in Israel have expressed alarm in private over the election of Morsi and fear that their country's historical peace treaty with Egypt could be eroded over time. Mubarak helped police the Gaza blockade and did not let any goods officially cross the border, saying this was part of longstanding accords with Washington and Israel. However, Cairo always turned a blind eye to a thriving blackmarket business with Gaza conducted through a warren of underground tunnels. A few hundred people cross in and out of Gaza every day via Egypt and the number of passengers has increased since Morsi took office. However, officials on both sides explain this on the start of the holiday season rather than on any policy shift. Morsi's position will soon be put to test when he meets officials from Hamas and the secular Fatah, which is backed by Western powers and rules in the nearby West Bank. Protocol means that Morsi will almost certainly see Abbas first, with one source saying it would happen on Wednesday. No date has yet been set for a Hamas delegation to be received. Both President Abbas and Hamas are likely to be pressed by Egypt to end their long-standing hostilities, which at one point saw the two sides fight a brief civil war in Gaza. "No one can help the Palestinians more than they can help themselves. They should take daring steps to end their rifts," an official in Cairo told Reuters by phone.

Repeated attempts at Palestinian reconciliation have ended in failure, with the two sides at loggerheads on everything from setting a date for elections to cooperating on security.

"Theoretically, Morsi's election gave a boost to Hamas, but the man has a million domestic problems to handle at home," a diplomat in the region told Reuters, asking not to be named.

"If Morsi publicly backs Hamas, he would be seen as supporting the Palestinian division and that would reflect badly on his foreign policy. He has to tread it carefully," he added.