Syria sent thousands of troops surging towards Aleppo in the early hours of Wednesday, where its forces have been pounding rebel fighters from the air, engulfing the country's largest city in total warfare to put down a revolt.

Recent days have seen Syria's 16-month-old uprising transformed from an insurgency in remote provinces into a battle for control of the two main cities, Aleppo and the slightly smaller capital, Damascus, where fighting exploded last week.

President Bashar Assad's forces have launched massive counter assaults in both cities. They appear to have beaten rebels back from neighborhoods in the capital and are turning towards Aleppo, a commercial hub in the north.

Syrian forces fired artillery and rocket barrages early on Wednesday at the northern Damascus suburb of al-Tel in an attempt to seize the town from rebels, causing mass panic and forcing hundreds of families to flee the area, residents and opposition activists said. The 216th mechanized battalion headquartered near Tel started bombarding the town of about 100,000 people at 3:15 am (0015 GMT) and initial reports indicated residential apartment blocks were being hit, they said.

"Military helicopters are flying now over the town. People were awakened by the sound of explosions and are running away," Rafe Alam, one of the activists, said by phone from a hill overlooking Tel. "Electricity and telephones have been cut off."

Opposition activists said thousands of troops had withdrawn with their tanks and armored vehicles from the strategic Jabal al-Zawiya highlands in Idlib province near the Turkish border and were headed towards Aleppo.

Rebels attacked the rear of the troops withdrawing from the region at the villages of Orom al-Joz and rami near the main Aleppo-Latakia road and at the village of al-Bara west of the Aleppo-Damascus highway, activist Abdelrahman Bakran said from the area.

In Aleppo, helicopters swirled overhead firing missiles throughout Tuesday, residents said. Rebels were battling government forces by the gates of the historic old city. Troops fired mortars and shells at rebels armed with rifles and machineguns.

"I heard at least 20 rockets fired, I think from helicopters, and also a lot of machinegun fire," a resident near one of the areas being shelled, who asked to be identified only by his first name Omar, said by telephone.

"Almost everyone has fled in panic, even my family. I have stayed to try to stop the looters; we hear they often come after an area is shelled." 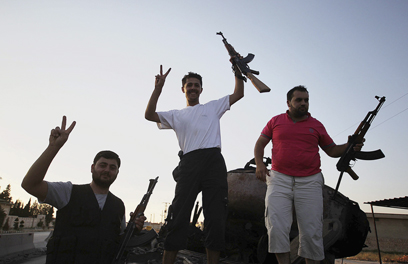 Residents said fixed-wing jets had also flown over the city, followed by loud noises, although there were contradictory reports as to whether they had fired.

Some residents said they believed the planes had dropped bombs, but others said booming sounds could have been caused by supersonic jets breaking the sound barrier. A correspondent for Britain's BBC television said the jets had fired.

Assad's forces have occasionally launched air strikes from fixed-wing jets on other cities during the uprising, but tend to rely on helicopters for air strikes in urban areas.

Elsewhere in the country, activists said government troops and pro-Assad militia known as shabbiha had attacked a mosque in a village northwest of the city of Hama.

"Troops and shabbiha left the roadblock on the edge of Shariaa and crossed the main road and began firing automatic rifles on the worshippers as they were entering the mosque," activist Jamil al-Hamwi said by telephone from the area.

"We have confirmed the names for 15 bodies and it is estimated there is a similar number still to be collected from the streets," said Hamwi, who uses a pseudonym for security reasons. The account, like others from activists, could not be confirmed. Syria restricts access by international journalists.

At least nine people were killed in army shelling of al-Herak, a town south of Deraa, the cradle of the revolt against more than four decades of Assad family rule, activists said.

In Damascus, troops were trying to snuff out rebel resistance in several areas, including Barzeh, near the centre, and the southern districts of Hajar al-Aswad, Asali and Qadam.

Tanks prowled the streets of Midan, a neighborhood recaptured by the army from rebels on Friday.