The Pentagon has reached an agreement with Lockheed Martin Corp on a $450 million program to enhance electronic warfare equipment on the F-35 fighter jet, and integrate Israeli-unique systems beginning in 2016, according to sources familiar with the negotiations.

The deal, to be finalized in coming weeks, marks a big step forward for Israel's $2.75 billion agreement to buy 19 F-35 jets, which was signed in October 2010 and includes options for up to 75 of the radar-evading fighters.

The Pentagon said the Israeli foreign arms sale could be worth up to $15.2 billion if all options are exercised, when it first approved the sale in September 2008.

"This agreement kicks off the Israeli program," said one of the sources, who was not authorized to speak on the record. "Now all of the agreements are in place." 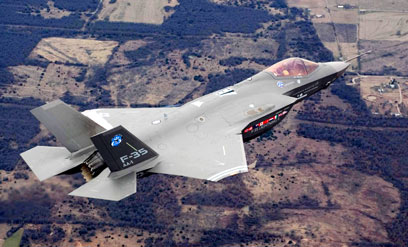 The F-35 will allow for even greater collaboration in the coming years with Israel, a critical strategic ally for the United States at a time when much of the Middle East is in turmoil.

The deal comes as Defense Secretary Leon Panetta prepares to visit Israel next week where he will discuss heightened tensions with Iran, which on Thursday underscored its support for Syria despite its brutal crackdown on a 16-month uprising.

It also provides a vote of confidence in the embattled F-35 program, whose cost and technology challenges have overshadowed a year of progress in flight testing.

The deal will allow increased participation in the F-35 Joint Strike Fighter program by Israeli companies, including Elbit Systems Ltd and state-owned Israel Aerospace Industries, which will start building wings for the radar-evading warplane.

IAI already builds wings for the F-16 fighter jet, the world's most widely used fighter, also built by Lockheed. Elbit, in a joint venture with Rockwell Collins, makes the advanced helmet used by pilots on the single-seat F-35.

Agreement on development of the new Israeli version of the F-35 will allow Israel to install its own radio and datalink systems, as well as other equipment, on the jets it is buying.

But the deal also covers enhancements to the airplane's electronic warfare capabilities that will benefit the United States, Israel and the other nine countries that either have already ordered fighter planes, or plan to in coming years.

The radar-evading, multirole F-35 is the Pentagon's costliest arms purchase, expected to top $396 billion for 2,443 aircraft in three models through the mid-2030s.

Lockheed and its subcontractors are building the stealthy warplane for the US Air Force, Navy and Marine Corps along with Britain and seven other co-development partners – Italy, Turkey, Canada, Australia, Denmark, Norway and the Netherlands.

In addition to Israel, Japan also has a signed agreement to buy the F-35, which was designed to replace a range of fighter, strike and ground-attack aircraft, including the F-16.

The Defense Department this year postponed production of 179 F-35s until after 2017, stretching development and testing in an effort to curb costly retrofits and save money. The latest restructuring, the third such major revamp, added 33 months and $7.9 billion to the development plan.

Lockheed Martin, the Pentagon's No. 1 supplier by sales, is developing the F-35 with Northrop Grumman Corp and Britain's BAE Systems PLC. Britain initially invested $2 billion in the F-35's development, the most of any of the eight partner nations.

Work on the electronic warfare enhancements will be done largely by BAE Systems, the sources said.