The raging civil war just across the cease-fire line in Syria is posing an uncomfortable political choice for the Druze communities in the Golan Heights.

Do they maintain their traditional loyalty to the government of Bashar Assad, whose family has vowed to take back the territory? Or should they support the burgeoning Arab revolt against Assad's harsh rule?

In the shifting sands of the Middle East, the Druze again find themselves a people caught in the middle.

In Druze villages close enough to hear the fighting, families and friends are divided between backers of the revolt and supporters of the regime. A Druze doctor predicted his people would demand Assad's downfall, while a butcher in a nearby town denounced the Syrian uprising as a foreign conspiracy.

Israel captured the Golan from Syria in the 1967 Six Day War. In 1981 it annexed the strategic plateau, 65 kilometers (40 miles) long and 20 kilometers (12 miles) wide, because militarily, it commands Israel's north. The international community has not recognized the Israeli annexation. In negotiations, Israel has offered to exchange the territory for full peace, but talks broke down a decade ago over exact borders and other issues. 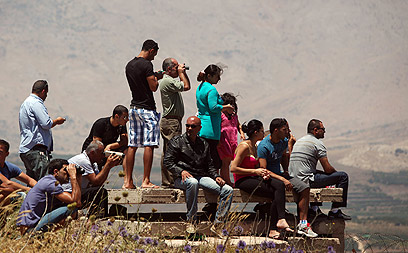 The Druze residents of the Golan Heights were offered Israeli citizenship, but only a few accepted. Many assumed that someday the territory would revert to Syria, by peace or by war, and those who identified with Israel might be treated as traitors.

The Druze – there are 20,000 in the Golan Heights – follow a secretive offshoot of Islam whose adherents live primarily in Syria, Israel, Lebanon and Jordan. Over the centuries, they have tried to keep to themselves, offering allegiance to whoever was in control of their territory.

The four main Golan Druze villages are near the cease-fire line with Syria. In the early weeks of the uprising against Assad last year, Golan's Druze staunchly lined up behind him. Now new voices are being heard.

"Most of the people here cannot distinguish between Assad and their homeland. They are looking to him as the face of the homeland and waiting for him to liberate us from the (Israeli) occupation," said Ali Abu Awad, a doctor in the village of Bukata. "But these days, when they can see what Assad is doing there, the big lie has started to fall. I think they will demand the fall of Assad."

Over the past week, he said most people in Bukata have climbed nearby hills to watch the fighting nearby.

"It's a different feeling to see with your eyes. You feel very useless, very empty, to see this army demolishing the civilian population," Abu Awad said. 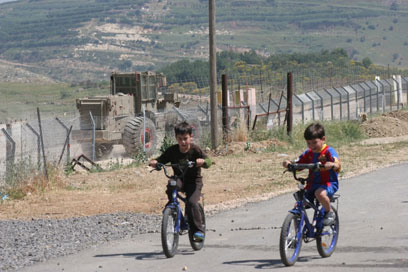 In nearby Majdal Shams, Assad supporters spoke out.

Hasan Fakhr Deen, a butcher, called the Syria conflict "a conspiracy of outside states."

He insisted that Syrians remained united and felt the nearby shelling and smoke across the border were legitimate attacks against "people who want to change the regime in Syria."

Besides its strategic importance, the Golan Heights are also a major source of water and recreation. Israelis flock there for hikes, an Israeli winery and the country's only ski resort.

The Druze are a part of that landscape, and Israeli tourists as well as soldiers frequent their restaurants.

Still, the Druze stay in touch with their Syria relatives and are sometimes allowed to cross over for weddings, university studies and religious pilgrimages. Golan-grown apples are also annually transferred over land to Syria to help Druze farmers market their crop.

The bloody crackdown in Syria has led the Golan Druze to begin speaking more freely.

Mahmoud Amasha, a Bukata apple farmer and insurance agent, said he was "convinced that the number of people opposing this regime grows every day."

But he said divisions over Assad's popularity in Bukata have "cast a shadow over the people in this town."

Syria's Sunni majority makes up the backbone of the opposition, and minorities such as the Druze and Christians fear they will be marginalized – or even targeted – if Sunnis take over.

Assad and the ruling elite also belong to a minority sect, the Alawites, a Shiite offshoot. Assad's regime always pushed a secular ideology, which was seen as giving minorities a measure of protection. 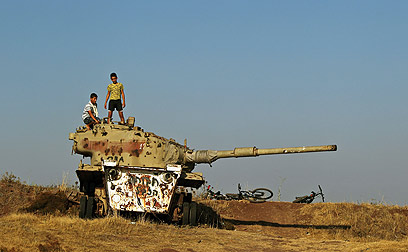 Residents say demonstrations break out every few weeks, some in favor of the regime and some against. The divisions have even pitted family against family and friend against friend.

Ruba Amasha, 17, said the three have remained friends, but that is not always the case.

"For instance, a pro-Assad person will say 'hi' to a friend on the street, and if the other person's against (Assad), they'll just keep walking," she said.

Alaa Alwely, a driver, said the Syrian civil war would likely delay any chance of the Golan returning to Syria. Given what was happening across the border, he said he was fine with that.

"I've lived a respectful life here," he said. "I was born under occupation. I'm not sure if Syrian rule would be better or not."