Klein and a friend in Ko Tao

While tensions between Israel and Iran grow stronger by the minute, two young women are proving that the two peoples aren't so different after all.

The two soon became friends and earlier this week decided to post a picture of themselves on Facebook. The picture shows the two making a heart sign with their fingers on the beach in Thailand. 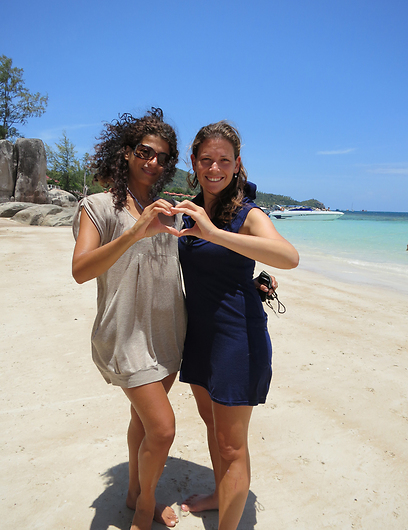 Ella and a friend in Thailand

Ella wrote on her Facebook page, "On the other side of the world, there are no wars, no conflicts, just sea & sun.... me and my friend from Iran took a moment to remind everyone that we're simply people who love eachother and love life!"

The photo received numerous likes and comments. "We decided it's an important message to pass on," Klein told Yedioth Ahronoth on Monday. She admitted she had never had an Iranian friend before this experience. "At first I didn't know how she would accept the fact that I'm Israeli," she said, "but it turned out that just as I don't hate the Iranians, they understand we're human beings too. Generally, life in a small island like Ko Tao, which has people from all over the world, shows that ultimately we're all just human beings. It's borders and leaders that deny us a free life."

On Monday, Ella's friend completed her diving course and returned to Tehran. Before saying their goodbyes, the two expressed hope that one day they will be able to visit each other's homes.

"When we said goodbye we joked how when we'll each go back home they'll take us directly to the interrogating room," Ella said. "I think that both sides think it's all very scary at the other side and that the oppression is much greater than it actually is."