In a major shake-up, Morsi also asked Defense Minister Hussein Tantawi to replace the commander of the military police, a force that has been heavily used since the ouster 18 months ago of Hosni Mubarak.

He also fired the commander of the presidential guards and named new chiefs for security in Cairo and the police's large central security, a large paramilitary force often deployed to deal with riots.

The intelligence chief that Morsi fired, Murad Muwafi, was quoted in Wednesday's newspapers as saying his agency was aware of the Israeli warning regarding the border attack but did not think that Muslims would attack Muslims while they were breaking their fast during Ramadan.

Muwafi was in charge of Egypt's relations with Israel and was involved in the negotiaitons that led to the release of Gilad Shalit from captivity in Gaza.

Muwafi will be replaced by Mohamed Rafaat Shehata, who served as deputy head of Egyptian intelligence.

The campaign to uproot the terrorists was launched on Tuesday, two days after gunmen ambushed a border guard outpost near Israel's border, the military said in a statement.

"Elements from the armed forces and interior ministry supported by the air force began a plan to restore security by pursuing and targeting armed terrorist elements in Sinai, and it has accomplished this task with complete success," it said.

It would continue "continue implementing this plan," it added in a statement, which did not provide details of the operation. 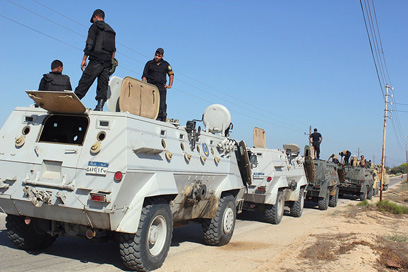 Egyptian media outlets reported that Morsi was updated on the developments in Sinai during a meeting at the Presidential Palace in Cairo with Defense Minister Mohamed Hussein Tantawi, Chief of Staff, Sami Hafez Anan and Interior Minister Ahmed Gamal Al Din.

The heads of Egypt's navy, air force and ground forces also took part in the meeting, as did new Prime Minster Hisham Kandil.

The reported Egyptian airstrikes in Tumah village - the first in the peninsula for decades - came as security forces massed near Rafah on the Gaza border for what they called a decisive confrontation with the terrorists.

A senior military official in Sinai confirmed the state television report and said "20 terrorists were killed" in Apache helicopter raids and when soldiers from the 2nd Infantry Division stormed Tumah.

He said the terrorists were trying to escape when the helicopter targeted their vehicles.

Other security officials in the north of the peninsula reported airstrikes near the town of Sheikh Zuwayid, close to the village.

The strikes came a day after the military held a funeral for the soldiers who died in Sunday's attack amid widespread calls for vengeance.

The soldiers were killed when the terrorists raided a border guard base under the cover of mortar fire, and commandeered a military vehicle into neighboring Israel before they were stopped by an Israeli helicopter strike.

Also on Wednesday, security officials said Egyptian police have arrested a Canadian student in Sinai on suspicion of involvement in the ambush.

They said the man, identified as David Edward, was in possession of an Egyptian identification card belonging to someone else and had taken pictures of armored personnel vehicles.

A Canadian embassy official said he could not confirm or deny the arrest, due to privacy reasons.

The officials said Edward entered the country on Sunday, the day terrorists killed the soldiers in an ambush, and was a student at a Canadian university.