The 48 Iranians who were reportedly kidnapped by Syrian rebels journeyed from Tehran on a trip organized by a travel agency owned by Iran's elite Revolutionary Guard Corps, The Wall Street Journal reported Wednesday.

Syrian rebels said they kidnapped a busload of Iranians on Saturday on suspicion of being military personnel. Tehran initially said they were pilgrims visiting a Shiite shrine in Damascus, but on Wednesday Iran's Foreign Minister Ali Akbar Salehi was quoted by Iranian media as saying that some of the Iranians kidnapped by Syrian rebels are retired members of Iran's Revolutionary Guard Corps and military.

Salehi denied they now have any military connection and insisted they were in Damascus for a religious pilgrimage. According to The Wall Street Journal's report, the Iranian captives traveled to Damascus on Saturday as part of a large contingent on a trip organized by a Revolutionary Guard Corps travel agency. 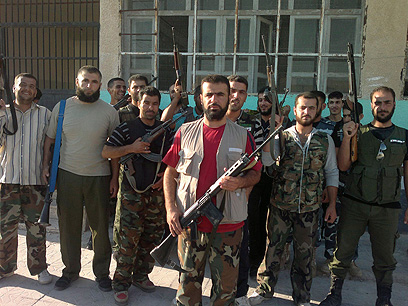 A person involved in the planning of the trip told the American newspaper the Iranians boarded six buses at the airport, and were and traveling along the highway to their destination, Hotel Al-Faradis in downtown Damascus, when the last bus in the convoy was stopped at a rebel checkpoint and abducted.

An employee of the tour agency that organized the trip told The Wall Street Journal that "everyone on this trip was either a Guard or a Basij militia (Iranian volunteer force). This wasn't a regular tour group." On Monday rebels from the Free Syrian Army said three of the Iranian hostages were killed during an attack launched by government forces. They threatened to kill the remaining hostages if the Syrian military does not stop its assault on them. According to the report, the Iranians traveled to Syria in order to train Syrian soldiers tasked with repressing rebel forces in Aleppo. Iran said Tuesday that it was holding the US responsible for the lives of its citizens taken hostage in Syria. "Because of the United States' manifest support of terrorist groups and the dispatch of weapons to Syria, the United States is responsible for the lives of the 48 Iranian pilgrims abducted in Damascus," Iran's Foreign Ministry said in a message transmitted through the Swiss embassy in Tehran, which handles US interests in the absence of Iran-US diplomatic ties.