Canadian Jews 'have a lot in common' with Israeli Ethiopians

Members of Montreal delegation volunteer in Beersheba, where 'people are even warmer.' Israeli: We're all just young people who want to enjoy life

A delegation of 15 young Jews from Montreal, Canada arrived in Israel some two weeks ago to become familiar with Beersheba.

The youngsters, aged 18-25, volunteered at various social organizations in the southern city, including the Nurit Absorption Center, Ilan Center, Be'er Sova, Inbalim and others. They renovated classrooms at the Nurit Absorption Center and organized a variety of family activities for Ethiopian immigrants who live at the Center.
Back to Basics
Canada's Drake revisits Jewish roots in new video
Leaked photos from rapper's video shoot show interior of a synagogue and yarmulke clad men
http://www.ynetnews.com/articles/0,7340,L-4208061,00.html
"This was a very meaningful experience for me," says mission member Jack Greenbaum, "firstly due to the volunteer work itself. Secondly, I got the chance to get acquainted with those Ethiopian immigrants; I'd never met Jews who weren't from either Israel or Canada. I discovered that I have a lot in common with those other young people of my age." One of the things the young Montrealers left behind them at the Nurit Center was a giant wall painting depicting a lion holding an Israeli flag and a Canadian flag in its mouth. "We view this painting as representing the magnificent Jewish connection between all of us," Lev Kalifa explains. "The flags symbolize the two partner countries and the lion symbolizes the immigration from Africa." 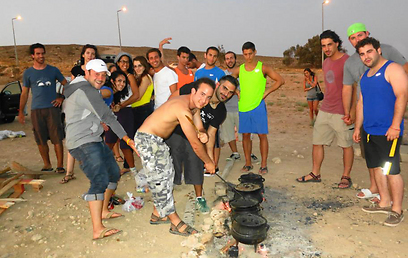 During their visit, the Montrealers explored the region and visited the Air Force and Negev museums and played paintball at Kibbutz Keramim.

"What I loved about Israel was the people," recounts Greenbaum, "but I have to say that the people in Beersheba were even nicer and warmer." Each evening the visitors were joined by a group of Israelis. "In the beginning, I didn't know what to expect," recalls Oz Lis, "because no matter what, these are people with a different language and from a different culture. But in no time we discovered that despite the geographical distance, we're all just young people who want to enjoy life. We were together at parties and at other recreational events, but we also participated in joint workshops dealing with various topics such as Jewish identity, being involved in society, and more."

Yiftach Zilka, another Israeli, said "these were an amazing two weeks. It really wasn't obvious in my mind that people would choose to come all the way to Israel from Canada and volunteer in Beersheba. Most young people who come to Israel prefer spending the summer on the beach in Tel Aviv. But these people came here to volunteer, and what they did helped strengthen the connection between us."

Matt Silver, a Canadian, agrees. "Yes, to come here and get to know Israelis of our age in Beersheba. It gave me an indication of what's happening here and made me want come back soon."

Ran Sagie, director of the Beersheba-Bnei Shimon Montreal Partnership said "this is what we do. We provide a bridge that connects between the Jewish community of Montreal and residents of Beersheba. But a successful connection between young people can never be taken for granted; it's important for us that they choose to preserve that initial connection in the future."