Chairman of US Joint Chiefs of Staff says strike on Tehran's atom facilities will only slow nuclear program down. Panetta says he 'doesn't believe' Israel made a final decision on strike

WASHINGTON – A possible Israeli strike on Iran's nuclear facilities may be able to hinder the Islamic Republic's atom ambitions but it will no destroy its nuclear program, General Martin Dempsey, Chairman of the Joint Chiefs of Staff, said Tuesday.

In a press briefing held in the pentagon, Dempsey and US Secretary of Defense Leon Panetta were asked for their opinion of a recent media report suggesting Israel was closer than ever to undertaking a unilateral strike against Iran, and whether they believed such military action would be effective.

Dempsey told reporters that "Militarily, my assessment hasn't changed. And I want to make clear, I'm not privy to their planning. So what I'm telling you is based on what I know of their capabilities. And I may not know about all of their capabilities. But I think that it's a fair characterization to say that they could delay but not destroy Iran's nuclear capabilities."

Panetta, on his part, said that Israel has not informed the US of any immediate plans to that effect. "I've said this before, I'll say it now – I don't believe (Israel has) made a decision as to whether or not they will, they will go in and attack Iran at this time," he said. 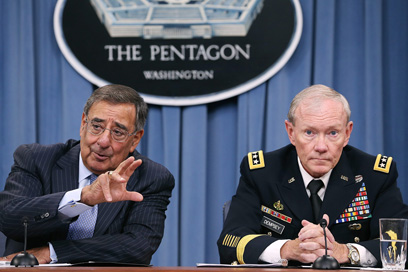 Panetta and Dempsey on Tuesday (Photo: AP)
"Obviously, they're an independent, sovereign country. They'll ultimately make decisions based on what they think is in their national security interest. But I don't believe they made that decision at this time." Panetta added that the US believes "there is room to continue to negotiate… The additional sanctions are beginning to have an additional impact on top of the other sanctions that have been placed there. "The international community is strongly unified in opposition to Iran developing any kind of nuclear weapon," he said. "We are working together, both on the diplomatic side as well as on the economic side… The United States and the international community are going to continue to press because, as I said and I'll continue to repeat – the prime minister of Israel said the same thing – that any kind of military action ought to be the last alternative, not the first."

Washington, Panetta stressed, still believes that "the window is still open to try to work towards a diplomatic solution."

'No one wants war'

As the debate over a possible strike on Iran grows heated, a top political source told Ynet Tuesday that "No one really wants a war. No one wants to strike. All this talk about a military strike has gotten too loud."

A Jerusalem source ventured that the public debate vis-à-vis the United States is meant to lead to an unequivocal statement by Washington that will have a clear effect on Tehran.

"President Obama must present a new position on Iran in a very public and clear way – in a way that would convince the Iranians that he is serious about the military option," a top political source said.

"He doesn’t need to convince Israel that he's serious – he needs to convince Iran. The Iranians have to understand that they conduct will carry a price."

The international community, he added "Must also exacerbate the sanctions further. The economic situation in Iran is dire, but it has yet to convince the regime to stop enriching uranium. A clear statement by Obama could change that."