Arabs workers take advantage of lax security on buses travelling from West Bank to central Israel; some Jewish passengers get off for fear of terror attacks

Palestinians in the West Bank have found an easy way to bypass IDF security checks: They simply board buses travelling to central Israel. The army said it was aware of the problem and is seeking a solution.

The security establishment has invested a lot of resources in preventing the entrance of hostile elements into Israel, and despite the billions that have been spent on the construction of the West Bank security barrier, it seems that Palestinian workers, and terrorists, can simply board a bus near Nablus and head to the heart of the Jewish state.

The Afikim bus company transports West Bank residents to the central Israel area. The security aboard Afikim's buses is lax and consists of a brief scan of the passengers by a security guard. Palestinian workers take advantage of the situation to travel to Tel Aviv and back without interruption. In some cases police were dispatched to the buses for fear that one of the Arab passengers was a terrorist, while in other instances heated arguments broke put between Jewish and Arab passengers. 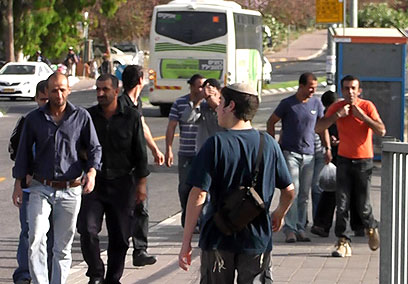 "I travel on these buses twice a day, and it has become a nightmare," a Jewish resident of the West Bank said. "On several occasions there was shoving and shouting, and some people get off because they are scared. There must be some sort of supervision over who enters Israel. In the current situation, terror groups are offered an air-conditioned bus."

Afikim has turned to local authorities for assistance, but its drivers are legally prohibited from screening passengers. "It's absurd that the state invests billions in security, fences and gates to block the entrance of terrorists to Israel, but then gives the terrorists such an easy way to infiltrate Israel or one of the settlements, plant a bomb and return to their homes," Gershon Mesika, head of Shomron Regional Council. The Transportation Ministry said "Palestinians carrying entry permits to Israel are permitted to use public transit. The IDF and the other relevant authorities in the West Bank must find a solution that will ensure the safety of the Israeli passengers."