The Times quotes source as saying that EU diplomats meeting in Doha agreed on the need to 'incentivize' senior officials in order to accelerate collapse of Assad regime. Free Syrian Army on General Tlass: He’s not a defector, he’s a millionaire

European countries have been cooperating with Arab states in the Persian Gulf to bribe top Syrian officials to defect from President Bashar Assad's regime, The Times reported Tuesday.

According to the British newspaper, during a meeting of European diplomats in the Qatari capital, Doha, in May, it was agreed that Syrian officials should be "incentivized" to defect from the regime in Damascus in order to hasten the collapse of the Assad government.

This strategy appears to have yielded immediate results, as a number of senior Syrian officials - including former Syrian Prime Minister Riad Hijab and General General Manaf Tlass - have announced their support for the rebels fighting forces loyal to Assad.

A source familiar with events at the meeting in Doha, which brought together ambassadors to Syria and Qatar, was quoted by The Times as saying that it was agreed that interference by Russia had destroyed any hope of success for the peace plan initiated by UN envoy Kofi Annan.

"They came to the decision that publicly the Annan plan had to be supported, but privately they needed an alternative. Defections were not coming fast enough. They had to coerce and incentivize these guys to drive a wedge into the regime," the source said. "Bribes were never mentioned explicitly, there was no need. Everyone understood precisely and left the meeting on the same page."

The source said the Syrian defectors do not just receive a suitcase full of cash for their pains, they are expected to contribute to the opposition effort. 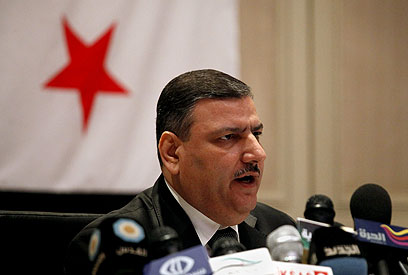 According to the report, Coordinators and fundraisers for the Free Syrian Army (FSA) in the Gulf confirmed that the new strategy had been in place for several weeks.

"Certainly bribes are being paid," an FSA fundraiser was quoted by The Times as saying. "Western intelligence agencies are keen to incentivize regime officials.

"The Friends of Syria are already thinking of the next phase after Assad, trying to gather third- and fourth-tier officials for the next step. They fear a disintegration of the country like Iraq," he said.

However, according to the report FSA operatives are concerned that some defectors are only leaving now in the hope of securing senior positions in government as the country is pieced back together. The Times said Tlass, the general and former right-hand man to Assad, who fled to Paris in July, arouses huge cynicism among the opposition.

"He’s not a defector, he’s a millionaire," said one FSA co-coordinator.

Fingers have also been pointed at Nawaf Fares, Syria’s former Ambassador to Iraq, who fled in July. One source in Doha was quoted by The Times as saying: "He’s not doing this out of the goodness of his heart."