Series of testimonies provided by IDF troops shed light on army's abusive behavior towards Palestinian kids in new report; group aims to prepare next generation of soldiers for harsh reality

The year is 2005. An Armored Corps battalion is stationed in the West Bank, near Nablus. Its goal? To protect the Trans-Samaria Highway from terrorists.

"We would go into the villages on a daily basis, two-three times a day at least, to demonstrate our presence," one of the soldiers says. "To show that we are here, that (the land) is ours and not yours.

"How do you do that? You send in a patrol squad or two, two Hummers followed by a Storm (armored personnel carrier). You set them loose in the villages. You send in an entire unit that marches in two rows down the streets, like a military parade.

"Sometimes, the commander would get bored and would decide to prove himself to the regiment commander… He would generate more and more friction, crush the population as much as possible, make their lives as difficult as possible. This in order to stop them from even thinking about throwing stones on the Trans-Samaria Highway, not to mention Molotov cocktails. 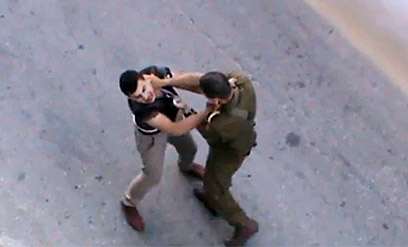 IDF officer headbutts Palestinian teen in July (Screenshot)
"Eventually it would work. The population would become so scared that people would just cower together. They would hardly ever go outside."

The soldier's account is just one of 30 testimonies featured in a new report released by Breaking the Silence, an organization that since 2004 has been interviewing IDF troops about their service in the West Bank. Fresh from the printers, thousands of copies of the report have arrived at group's headquarters ahead of the fast-approaching school year. Next week, they are to be distributed among the next generation of IDF soldiers – high school students in Tel Aviv and Jerusalem.

"The first time you point a weapon at a 5-year-old kid, you say that it isn't right," the soldier says in his statement. "But that changes when you go into the village and they throw stones at you. If you're in the village, and you pass by a school, you're automatically pelted with stones.

"Once, my driver got out, caught some kid and beat him up, really beat him up, for just sitting there. I think he just resembled some other kid, or maybe he wore the same T-shirt, or perhaps it was the same kid, but that isn't the point. He gave him a severe beating. He didn't even detain him, he just beat him up." 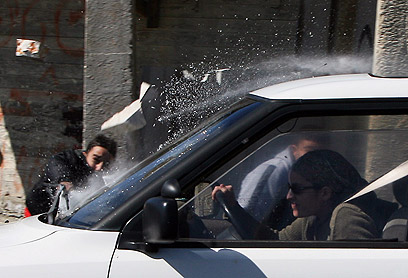 Palestinian boy throws brick at car in West Bank (Archive photo: AFP)
In another incident described by the soldier, a company commander grabbed a 12-year-old boy, got him to crouch on his knees and yelled threats at him in order to intimidate the other children, who earlier threw stones at the troops, into coming out on the street for questioning.

"It was like something out of a movie about Vietnam," the soldier says. "(…) it was clear that the threats weren't real, he's an officer, after all… He screamed at the kid to shut up, because he started crying and peed his pants."

Eventually, a village elder came out and convinced the commander to let the boy go. The next day, two Molotov cocktails were hurled at vehicles on the highway. "So we didn't even do our job," the soldier said. "And it makes you wonder, what is our job, anyway?"

Breaking the Silence's report is different from its predecessors in the fact that it focuses entirely on the way that troops treat Palestinian minors. While the group initially struggled with the decision to expose Israeli high school students to the grim incidents so graphically described in the report, the activists deemed the move "necessary."

"Exposing our teens to this reality is not a trivial matter," says Avner Gvaryahu, a former soldier who now works for the organization. His own testimony is featured in the latest report. "I have a 16-year-old brother. He's super cute… He recently received his first draft summons, and it is my first instinct to shield him from the bad stuff.

"The group hesitated to distribute the brochure among high school students… but it was eventually decided to go through with it. I'm queasy about it even though I understand that it's necessary… If you're old enough to enlist and carry a weapon, you're old enough to know what's really happening in the territories." 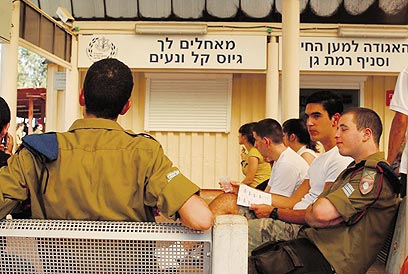 Gvaryahu, 27, studied social work and now works for Breaking the Silence as a Hebron tour guide. He spent his army service with the Paratrooper Brigadge's Orev Unit.

"They trained us to fight a real army, to shoot anti-tank missiles," he says. "No one prepared us for the routine activity. "For us it's routine, but for them it's an impossible reality, hellish even. And I'm referring to the children."

Hatred in the kids' eyes

This so-called routine activity, according to Gvaryahu, included the almost nightly seizures of homes for operational purposes, a procedure known as the "Straw Widow."

"The homes are inhabited, full of children; everyone screams and cries," he recalls. "You enter with your troops, and each weapon is charged. You're sure that someone is going to shoot you at any moment. You forget that you've got nothing on the family that resides in the home. Sometimes you sit there for six hours, sometimes it takes two or three days, depending on the army's operations in the area.

"You put the entire family in one room, close the door and designate a soldier as a guard. The adults don't go to work, the kids don't go to school, and no one goes shopping. They can eat what they have in the pantry." 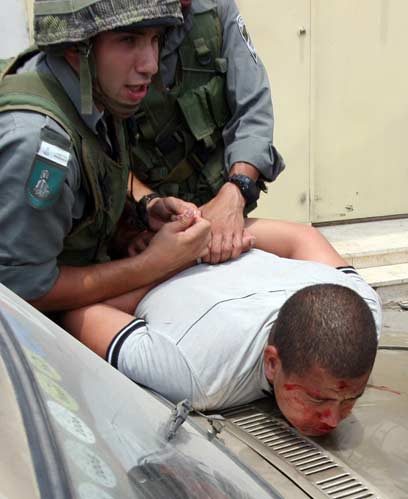 Gvaryahu says that he was raised in an environment that didn't question the army's activities and their significance for Israel's security. But performing several "Straw Widow" procedures made him acutely aware of the toll his actions take on the Palestinian families.

"I suddenly began noticing the kids' eyes," he says. "(…) They were full of disgust, full of hate. And the frustration is immense when you realize you're not the first soldier to enter their home."

While the situations described in the report aren't new, their effect is magnified when the tales are bound together. Even so, the group insists the brochure isn't meant as a provocation. The group doesn't aim to deter teens from enlisting in the army.

"I support army service, I think it's very important, but at the same time I believe that teens must be informed about what goes on in the territories," says Sagi Tal, 25, another former combat soldier whose statement is featured in the report. "I knew nothing when I got there, and I was shocked." A bit of preparation ahead of time would have changed his attitude, he says.

Byproduct of the occupation

The IDF accused the group of failing to submit its materials to the army, barring the security services from probing and properly addressing the grievances.

"The organization's refusal to turn to the authorities indicates its true motives… to generate negative publicity for the IDF and its soldiers," the Spokesperson's Unit said.

But the project's overriding goal, according to Gvaryahu, isn't to incite, but to alert the general public to the practices employed by the IDF in the West Bank. 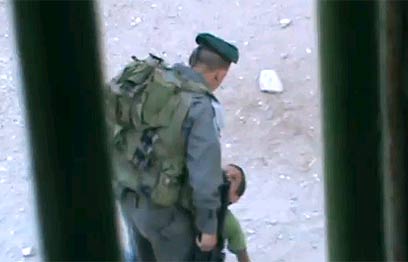 Border Guard kicks Palestinian kid in June (Photo: B'Tselem)
The activist deflects criticism that the report is one-sided and fails to stress the fact that troops are often hurt by the barrages of bullets and stones. "When I entered Nablus for the first time, we were fired upon. One of my soldiers was shot in the thigh a few meters in front of me. They didn't throw flowers at us. But the violence against IDF troops is a well known fact. It is extensively reported on a daily basis. We chose to deal with the stuff that isn't talked about. It isn't discussed because it is uncomfortable to discuss it. "Of course there are positive elements in Israeli society and our reality here, but I feel it's my duty not to talk about the positive stuff but to shed light on the dark and violent sides, which are a byproduct of the occupation."

According to Breaking Silence Executive Director Dana Golan, the report was born out of the notion that Israeli society is very sensitive to injustices towards children.

"We are a society that nurtures the family structure, child birth and child rearing," she says. "We have collected testimonies from more than 800 soldiers who served in the territories over the past decade. Each featured stories about the treatment of children, and each such story is a kick in the gut." Golan, 29, served as an education officer in the Border Guard. Four years after completing her service, she heard a lecture conducted by the organization and decided to go on a tour of Hebron, before contributing her own testimony. She has been active in the group ever since, and has been managing it for the past three years.

"The IDF treats Palestinian children differently from the way that Israeli society treats its kids," she says.

Activists are to hand out copies of the report outside high schools starting next week. The group is aware that some of the teens might disregard the brochure, but Golan says that even if they read just a testimony or two in the privacy of their own home, the group's goal would be served.