"Iran must not be allowed to develop nuclear weapons. We must act together, determinedly and firmly, with all the means at our disposal in order to (achieve this goal)," Vice Prime Minister Moshe Ya'alon said Tuesday during a commemoration ceremony for the victims of the terror attack in Burgas, Bulgaria.

The ceremony, which took place in Sofia's main synagogue opened with a moment of silence for the victims. Bulgaria's president and the Israeli ambassador were among the dignitaries who attended the event. Jewish community leaders and the bereaved families were also on hand.

"The enlightened western nations must join hands and fight the radical Islamist terror," Ya'alon said while accusing Iran of funding and arming the terrorists. 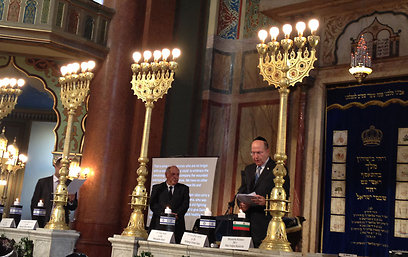 "This terror is occasionally carried out by (Iran's) proxy – the murderous Hezbollah organization. Its

objective is to destroy western culture, expand the Islamic revolution and wipe Israel off the map," the vice premier told the ceremony.

"The Iranian leaders are serious in their intentions. This is why they are developing a military nuclear program, which has reached very advanced stages, and they can use this deadly weaponry – also through terror attacks in different locations across the globe," he said.

"We mustn't sweep the reality under the carpet. We should impose harsher sanctions and not be under the illusion that we are dealing with a conventional regime. We mustn't take any option off the table. And, before it is too late, we must force the violent, tyrannical Iranian regime to face a dilemma: A bomb or survival."

Addressing the terror attack, Ya'alon said "dozens were targeted only for being Jewish and Israeli. Each and every one of them was an entire universe – a life story cut short."

"The murderers will reach every corner of the planet and will not hesitate to murder whoever comes in their path. Other than wanting to kill without distinction, they also try to sabotage the relations between Israel and the world's enlightened countries, but they will not succeed," he added.