Palestinians protesting a rising cost of living in the West Bank pelted a government building with stones and burned tires in the streets on Monday, in a sign that a nascent movement against the Western-backed government could spiral out of control.

In Hebron, dozens of youths threw shoes at a poster of Palestinian Prime Minister Salam Fayyad, chanting "The government has betrayed us."

The violence is likely to set alarm bells ringing, not least in Israel, where security chiefs have warned of the risk of unrest at a time of growing economic hardship coupled with total paralysis in Israeli-Palestinian peace negotiations.

Poor planning, tight Israeli controls and global economic worries have caused a marked slowdown in the Palestinian economy, with growth rates falling by half from the 9% increase registered in 2010. 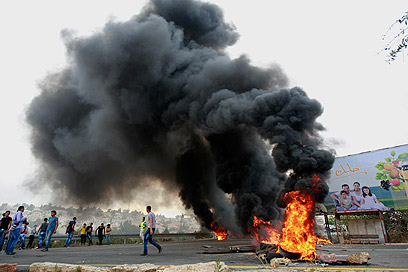 The Palestinian Authority, which exercises limited self-rule in the West Bank, has taken on increasing debt to overcome its shortfalls, but economists say that the situation is unsustainable.

Earlier on Monday more than a thousand Palestinians had joined a rally in Hebron, which is accustomed to violent confrontations with Israeli settlers but is not used to inter-Palestinian discord.

Public transport workers also staged a strike across the small territory to demand a cut in fuel costs, preventing many people from getting to their work, while a number of schools reported low attendance.

Taxi drivers blocked the street in front of Fayyad's office in the West Bank administrative capital Ramallah, while dozens of youths urged him to "leave, leave," echoing a slogan made popular in the Arab Spring.

The West Bank protest movement kicked off last week, when the price of fuel was increased by five percent after key suppliers in Israel hiked their charges.

Palestinian President Mahmoud Abbas has welcomed the demonstrations, equating them with the Arab Spring and blaming Israeli policies for the economic turbulence.

However, public anger has so far been directed solely at his own administration rather than at Israel.

In a move that could spark further trouble, Palestinian Finance Minister Nabil Kassis said on Monday that civil servants earning over NIS 2,000 (about $500) a month would only receive part of their August pay because of an on-going cash crisis.

The PA's financial woes, caused in part by a fall in aid donations, especially from Gulf states, has delayed salary payments for 153,000 civil servants several times already in 2012, with no solution in sight.