Demonstrators in Ramallah wave signs reading, 'Do not touch our prophet'

Hundreds of Palestinians on Monday staged a peaceful protest in Ramallah against an anti-Islam film that has sparked violent demonstrations in the Muslim world.

Participants of the sit-in, organized by the Palestinian Authority's Waqf (religious endowment) and held outside its offices, held signs saying "We are against those who oppose you Mohammed" and "Do not touch our prophet."

Speaking at the event, Waqf minister Mahmoud Habbash called on the United States to remove the film and apologize for it. 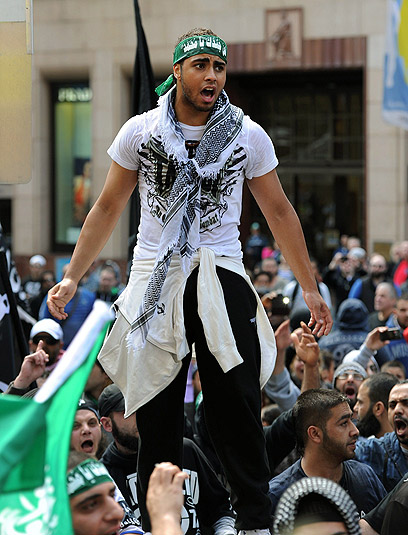 The low-budget, US-produced "Innocence of Muslims" movie has incited a wave of bloody anti-American violence in Libya, Egypt, Sudan, Tunisia, Yemen and in several other countries across the Muslim world.

The film, in which actors have strong American accents, portrays Muslims as immoral and gratuitously violent. It also pokes fun at the Prophet Mohammed and touches on themes of pedophilia and homosexuality.

On Saturday, hundreds of Israeli Arabs protested against the film, and on Friday thousands of Palestinians protested in the Gaza Strip and hundreds in east Jerusalem, where there were clashes with Israeli police.