With settlers' help, Palestinians to get new homes

Surges in construction beyond the Green Line usually mean expanded settlements and new outposts, but an unlikely initiative has made sure that this time, Palestinian towns will be the ones to expand in the near future.

In the coming days the Civil Administration is set to approve a plan to build new housing in six Palestinian villages located in Area C, a West Bank region that is largely populated by Jews and is under Israeli control. The area's 50,000 Palestinian residents are bound by the construction moratorium imposed on the settlements, and in fact no new Palestinian construction has been approved there since the Second Intifada. Permit applications have been sweepingly denied.

Three years ago, the Palestinian communities in Area C found an improbable advocate in Eliaz Cohen, a poet and member of the Yesha Council who was shocked to learn of the inadequate living conditions in the village of Hirbat Zachariah. 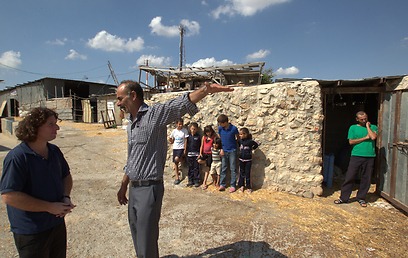 Planning the expansion. Cohen and Saad (Photo: Atta Awisat)
"The conditions there were substandard," he said. "The overcrowding is terrible and children are forced to leave the villages when they grow up because there is no authorization to build new homes. "They couldn’t even build bathrooms," he continued. "Some of the families lived in a goat pen that was converted into a house." Residents of Hirbat Zachariah, located within the cluster of settlements dubbed Gush Etzion, have a long history of friendly relations with the surrounding Jewish communities. And so Cohen decided to enlist his fellow settlers to fight their Palestinian neighbors' fight. An article Cohen published in an area newspaper was initially treated as a joke, but the initiative kicked into high gear after it received the backing of Gush Etzion Regional Council Head Davidi Perl and his predecessor, Shaul Goldstein. The settlers began pressing the Civil Administration and Defense Minister Ehud Barak to authorize construction, raising the issue at every meeting with army officials. The efforts peaked in 2010, when the Mideast Quartet's special envoy Tony Blair visited the village and later brought up the issue in his meeting with Prime Minister Benjamin Netanyahu.

"We are people who live together," the head of the village, Muhammad Saad, said. "It doesn’t make sense to see my neighbor living and growing, while I'm suffocating. For years I've been going to Civil Administration meetings, but only now, God willing, there is a light at the end of the tunnel." 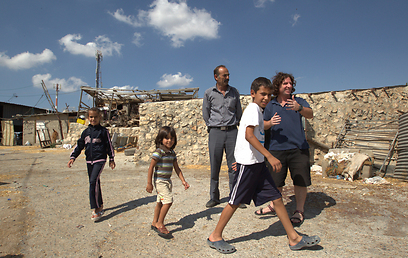 Cohen and Saad in Hirbat Zachariah (Photo: Atta Awisat)
, And indeed, Saad was informed last week by the local land authorities that they have authorized the construction of 300 new homes. The project's planning is now in the works.  Saad and Cohen, who paid a visit to the village a few days later to celebrate the good news, wasted no time; they laid out a map of the region and began plotting the expansion. Cohen suggested that the village's public facilities should be built west of the region's main highway, on the side adjacent to the Rosh Tzurim settlement. "It's close to our school," he explained. "Our vision is that one day we'll share the sports hall, the yard and the public buildings.

"This way our kids will learn what Prophet Zachariah, who is buried here, wrote," he added, busting out a bible and concluding with a quote. "'Do not oppress the widow or the fatherless, the alien or the poor. In your hearts do not think evil of each other.'"