Area where drone was shot down

The aircraft was shot down by two F-16I jets in an open area in the northern Negev region, and its remains were scattered in an open area in the south Mount Hebron region. Army forces were alerted to the scene in order to collect the remains in hopes of identifying the drone, the IDF Spokesperson's Unit said.

According to an initial investigation, the drone penetrated Israeli airspace at around 10 am after flying over the Mediterranean Sea, near Gaza. The Air Force detected the drone as it approached Gaza's coastline, and F-16I fighter jets were scrambled from the Ramon army base in the Negev to shoot it down.

Watch drone being shot down

The aircraft "was identified penetrating Israeli airspace this morning, and was intercepted by the IAF at approximately 10 am," the military said in a statement.

The IDF estimates that the unmanned aircraft did not depart from the Gaza Strip. The aircraft's country of origin has not yet been confirmed. It flew over Israel for less than 30 minutes and did not carry any explosives on it. 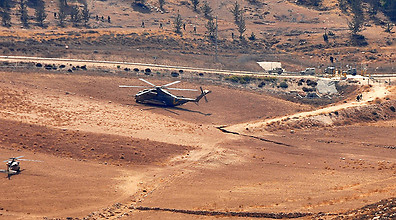 IDF chopper in are where drone was downed

IDF Spokesperson Yoav Mordechai said that the aircraft was monitored and accompanied by fighter planes throughout its flight and that it was possible to shoot it down at any stage, "however, it was decided to intercept the aircraft near southern Mount Hebron for safety reasons."

Defense Minister Ehud Barak has congratulated the military in a statement. "We view this incident of attempting to enter Israeli airspace very severely and we will consider our response later," he said.

According to Palestinian Ma'an news agency, the aircraft is an Unmanned Aerial Vehicle that departed from the Gaza Strip and managed to fly over several Israeli towns and bases in southern Israel, including the city of Beersheba. 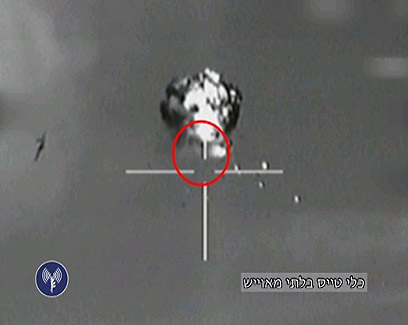 A loud explosion was heard in the area after the aircraft was shot down. The UAV's remains fell in an open area in southern Mount Hebron.

Large IDF forces, including fighter planes and the army's bomb squad unit were called to the scene shortly after the aircraft was downed. Residents, who live nearby reported of unusually loud explosion noises. "We were eating breakfast and suddenly heard the explosion," Yaffa Solomon, a resident of Meitar said. "Only later did I understand what happened. I can’t believe this is happening. The region is just flaring up," she said.

In August 2006, toward the end of the Second Lebanon War, the IAF intercepted two Hezbollah "Ababil" drones. One drone was downed over the sea, in Lebanese airspace, while the other was shot down north of Haifa.

On Saturday, the ministry of interior in the Hamas-run government in the Gaza Strip conducted a field drill for all its security services, including police and national security, the Ma'an news agency reported.

A ministry statement said the maneuver was part of a "normal drill" for all the ministry’s security services and in line with the ministry’s efforts to maintain security and stability in the Gaza Strip.