The world stood at the brink of Armageddon for 13 days in October 1962 when President John F. Kennedy drew a symbolic line in the Atlantic and warned of dire consequences if Soviet Premier Nikita Khrushchev dared to cross it. An American U-2 spy plane flying high over Cuba had snapped aerial photographs of Soviet ballistic missile sites that could launch nuclear warheads with little warning at the United States, just 90 miles away. It was the height of the Cold War, and many people feared nuclear war would annihilate human civilization.

Op-ed: It won’t work without the Americans

Soviet ships carrying nuclear equipment steamed toward Kennedy's "quarantine" zone around the island, but turned around before reaching the line. "We're eyeball-to-eyeball, and I think the other fellow just blinked," US Secretary of State Dean Rusk famously said, a quote that largely came to be seen as defining the crisis.

In the five decades since the nuclear standoff between Washington and Moscow, much of the long-held conventional wisdom about the missile crisis has been knocked down, including the common belief that Kennedy's bold brinksmanship ruled the day. On the eve of the 50th anniversary of the Cuban missile crisis, historians now say it was behind-the-scenes compromise rather than a high-stakes game of chicken that resolved the faceoff, that both Washington and Moscow wound up winners and that the crisis lasted far longer than 13 days. Declassified documents, oral histories and accounts from decision-makers involved in the standoff have turned up new information that scholars say provides lessons for leaders embroiled in contemporary crises such as the one in Syria, where President Bashar Assad has ignored international pleas to stop attacks on civilians in an uprising that has killed more than 32,000 people. Another modern standoff is over Iran, which the West accuses of pursuing a nuclear weapons program. In a recent UN speech, Prime Minister Benjamin Netanyahu drew a red line on a cartoon bomb to illustrate that a nuclear Tehran would not be tolerated. "Take Iran, which I have called a Cuban Missile Crisis in slow motion," said Graham Allison, author of the groundbreaking study of governmental decision-making "Essence of Decision: Explaining the Cuban Missile Crisis." "This same process is looming on the current trajectory, inexorably, toward a confrontation at which an American president is going to have to choose between attacking Iran to prevent it becoming a nuclear weapons state or acquiescing and then confronting a nuclear weapons state," Allison said.

"Kennedy's idea would be, 'Don't let this reach the point of confrontation,'" he added. "The risks of catastrophe are too great."

Among the common beliefs about the Cuban missile crisis that have been reevaluated: Kennedy resisted pressure from aides advising that he cede nothing to Moscow and even consider a preemptive strike. He instead engaged in intense behind-the-scenes diplomacy with the Soviets, other countries and the UN secretary-general.

Attorney General Robert F. Kennedy met secretly with the Soviet ambassador on Oct. 27 and conveyed an olive branch from his brother: Washington would publicly reject any invasion of Cuba, and Khrushchev would withdraw the missiles from the island. The real sweetener was that Kennedy would withdraw Jupiter nuclear missiles from US installations in Turkey, near the Soviet border. It was a secret pledge known only to a handful of presidential advisers that did not emerge until years later.

"As the historical record has expanded, the image of the resolute president has given way to the resolution president," Cuba analyst Peter Kornbluh wrote in an article in the November issue of Cigar Aficionado.

Nevertheless, the brinkmanship myth persists, with President George W. Bush in 2002 citing the missile crisis as a historical lesson in fortitude that justified a preemptive invasion of Iraq. "The storyline is a lot easier that Kennedy stood steely-resolved, faced Khrushchev down and that's it," said Allison, a professor at Harvard University's John F. Kennedy School of Government and former senior defense adviser to several Democratic and Republican administrations. "If you hang tough enough the other guy will eventually yield – that is actually the lesson that became part of the popular mythology."

Both sides came out winners

The Jupiter missiles are sometimes described as nearly obsolete, but they had come online just months earlier and were fully capable of striking into the Soviet Union. Their withdrawal, along with Kennedy's assurance he would not invade Cuba, gave Khrushchev enough to feel he had saved face and the following day he announced the imminent dismantling of offensive weapons in Cuba.

Soon after, a US-Soviet presidential hotline was established and the two nations initiated discussions that led to the Limited Test Ban treaty and ultimately the nuclear Non-Proliferation Treaty. 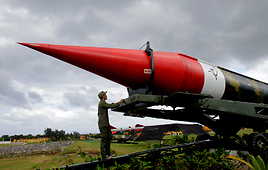 "The major lesson is the necessity of compromise even when faced with a crisis like that," said Robert Pastor, an international relations professor at American University and former national security adviser for Latin America under President Jimmy Carter

Pastor said he had many discussions about the missile crisis over the years with his late father-in-law, Robert McNamara, who was Kennedy's defense secretary. Pastor said domestic politics made it tough for both Kennedy and successive presidents to heed that lesson, as evidenced by Kennedy's intense efforts to keep the deal secret.

President Barack Obama, for example, faces considerable pressure to maintain a tough line on Cuba. Among the issues are the US embargo, demands for political change, an American government subcontractor imprisoned in Cuba as an alleged spy and five Cuban intelligence agents serving long sentences in the United States. "Look at US-Cuban relations right now," Pastor said. "I don't think Obama would consider a compromise, because the pressure on him that 'You gave in to the Cubans' is too great."

On Oct. 27, a US warship dropped depth charges over a nuclear-armed Soviet sub and the Soviets shot down a U-2 spy plane over Cuba. It was "the darkest, most dangerous day of the crisis," Kornbluh said.

Yet after Kennedy on Oct. 22 announced a US naval quarantine around the island to prevent more military equipment from arriving, Khrushchev recalled ships carrying nuclear equipment the following day, according to the 2008 book "One Minute to Midnight" by Michael Dobbs, which was based on newly examined Soviet documents. That means that on Oct. 24, when Secretary of State Rusk made his famous "eyeball-to-eyeball" statement reacting to supposedly up-to-the-minute intelligence, the vessels were already hundreds of miles away, steaming home. "This thing about eyeball-to-eyeball, it never was. That confrontation never took place," said Kornbluh, who is a Cuba analyst at the nongovernment National Security Archive, which has spent decades working to get missile crisis documents declassified.

The CIA learned late in the game about the ballistic missiles' presence in Cuba, and they were already operational by the time Kennedy was informed of their existence.

The agency was also unaware of other, tactical nuclear missiles in Cuba that could have been deployed against a US attack. The Soviets had even positioned nuclear-tipped missiles on a ridge above the US naval base at Guantanamo Bay in preparation for an invasion. "They were going to obliterate the base," Kornbluh said.

Indeed it was 13 days from Oct. 16, when Kennedy was first told about the missiles, to Oct. 28, when the Soviets announced their withdrawal.

But the "October Crisis," as it is known in Cuba, dragged on for another tense month or so in what Kornbluh dubs the "November Extension," as Washington and Moscow haggled over details of exactly what weapons would be removed. The Soviet Union also had problems dealing with Fidel Castro, according to a Soviet document made public this month by Svetlana Savranskaya, a Russia analyst for the National Security Archive.

Deputy Premier Anastas Mikoyan traveled to Cuba that Nov. 2 and spent 20 days in tense talks with the Cuban leader, who was angry the Soviets had reached a deal without consulting him. Castro lobbied hard but unsuccessfully to keep the tactical nuclear weapons that the Americans had not learned about.