Murdered US ambassador to Libya asked to beef up security

WASHINGTON - US Ambassador Chris Stevens, who was killed along with three other Americans in the terror attack this past Sept. 11 at the US Consulate in Benghazi, warned of the deteriorating security situation in Libya and sent the State Department several requests for increased security for diplomats in the country.

Republican members of the House Oversight and Government Reform Committee, which is investigating the attacks, released this weekend documents supporting the claim that security provided for American diplomats in Libya was inadequate. The release of the 166 pages of internal State Department documents is expected to help Republican presidential candidate Mitt Romney in his third and final debate with President Barack Obama on Monday, which will focus on foreign policy.

In a series of cables, Ambassador Stevens urged the State Department to boost security around American diplomats. On July 9, 2012, Stevens sent a "request for extension of tour of duty (TDY) personnel." He was referring to a 16-man military temporary security team with expertise in counter terrorism. They were set to leave in August, but Stevens asked to keep them "thru mid-September." 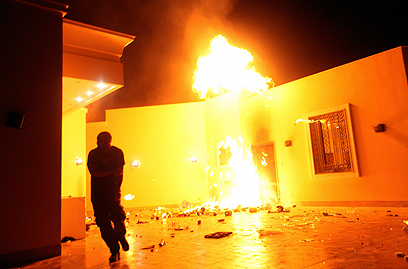 Attack on US consulate in Benghazi (Photo: Reuters)

On August 2, six weeks before he died, Stevens requested "protective detail bodyguard potions," saying the added guards "will fill the vacuum of security personnel currently at post who will be leaving with the next month and will not be replaced." The ambassador called "the security condition in Libya ... unpredictable, volatile and violent."

On August 8, as the special security teams left Libya, another memo from Stevens said "a series of violent incidents has dominated the political landscape" and called them "targeted and discriminate attacks."

On September 11 - the day the Ambassador was killed - he sent a weekly report expressing Libyans' "growing frustration with police and security forces who were too weak to keep the country secure."

The Benghazi terror attack has become an increasingly charged issue in the US presidential campaign, and it will likely be raised during Monday's debate in Florida. Romney is expected to criticize Obama over the security failures which left the US consulate in Benghazi vulnerable and repeat his accusation that the White House hid behind a false claim that the attack was born out of popular demonstrations against an anti-Muslim video.

However, a CIA memo written four days after the attack appears to support the administration's position. According to the Washington Post, the document stated that "currently available information suggests that the demonstrations in Benghazi were spontaneously inspired by the protests at the US Embassy in Cairo and evolved into a direct assault against the US diplomatic post in Benghazi and subsequently its annex. There are indications that extremists participated in the violent demonstrations."

This was the White House's position as well, until additional information surfaced indicating that the attack was premeditated.