Lebanon PM offers to resign after bomb, told to stay

Lebanese Prime Minister Najib Mikati said on Saturday that he offered his resignation but that President Michel Suleiman asked him to stay on for a "period of time."

Lebanon's opposition March 14 bloc had called for the government, which includes ministers from the terrorist group Hezbollah, to resign after a bomb attack in Beirut on Friday killed a prominent Lebanese intelligence official opposed to Syrian President Bashar Assad.

Sunni Muslim gunmen blocked roads with burning tires in Beirut and other cities on Saturday in protest against the assassination of Brigadier-General Wissam al-Hassan, a Sunni. 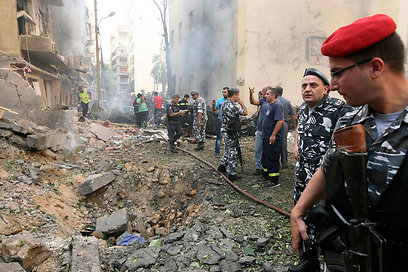 Mikati, himself a Sunni like all Lebanese prime ministers, is also close to Hezbollah, a group closely allied with Damascus, which protesters accuse of orchestrating Friday's car bombing. "In a meeting with (the president), I told him that I do not want to stick to the post of Prime Minister and that we need to consider the formation of a new government," he said, adding that the cabinet will eventually resign.

"I accepted (the president's request to stay) as there is a fear that Lebanon will fall into unrest," he said. Mikati indicated that he thought Damascus, which has a decades-old history of intervening in Lebanon, was behind the attack. He said he suspected it was related to the indictment in August of former minister Michel Samaha, a supporter of Assad, over a plot allegedly aimed at stoking violence in Lebanon. "A prime minister does not anticipate investigations, but quite honestly...I cannot separate in any way the crime that took place yesterday and the discovery of the conspiracy against Lebanon in August," he said.