Israeli state officials accused Qatar's emir Sheik Hamad bin Khalifa Al Thani of "hurting the Palestinians and the chance of pulling Gaza out of the mud and onto the road for peace."

The Qatari ruler on Tuesday became the first head of state to visit Gaza since Hamas seized control of the strip five years ago.

"It's funny that Qatar's ruler intervenes in the internal Palestinian conflict and chooses to support Hamas," a Foreign Ministry official said. He added that Al Thani had thus placed himself in the company of "violent extremists." During his visit to Gaza, Al Thani said he would donate $400,000 to a project to restore Gaza. "His money will only serve to drive its benefactors deeper into corruption, hatred and excess. It will highlight the damage Hamas causes to the Palestinians. You could say that Qatar had thrown peace under the bus." 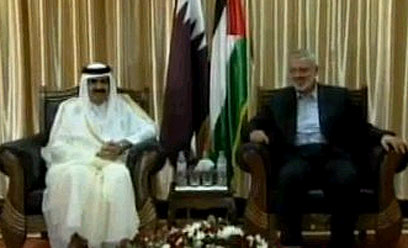 For years Qatar and Israel maintained secret diplomatic relations at the height of which Israel opened an office representing its financial interests in the Gulf country. Qatar was meant to do the same in Israel but ultimately failed to do so.

Relations between the two countries deteriorated dramatically following Operation Cast Lead in 2009 and the Israeli office in Qatar was closed. Qatar later offered to secretly reopen the office but Israel refused.

Having traditionally maintained a neutral stance in the Middle East, Qatar has now chosen to lend its support to Iran and Gaza.

In Egypt, official support of the visit of the Emir of Qatar was expressed. A statement issued by the presidency in Cairo wrote that the visit was part of Egypt's support of the Palestinian issue and its efforts to break the blockade on the Strip and the residents of Gaza.

The Qatari emir arrived at the Gaza Strip through the Rafah crossing after his plane landed in the al-Arish airport in northern Sinai.

Upon meeting Al Thani, Hamas prime minister in Gaza Ismail Haniyeh said that the visit signifies the "breaking of the political and economic blockade on the strip."

In his speech, Haniyeh reiterated the claim of Palestinians on historic Palestine, insisting that they would not give up a single inch of the historic land.

Hamas prime minister also acknowledged the assistance of Egyptian President Mohamed Morsi in bringing the Qatari delegation to Gaza and thanked Qatar for its role in the prisoner exchange deal that was negotiated between Israel and Hamas last year.