Death toll climbs to 40 as megastorm pounds East Coast; 8.2 million lose power. Obama: Crisis is not yet over

The misery of superstorm Sandy's devastation grew Tuesday as millions along the US East Coast faced life without power or mass transit for days, and huge swaths of New York City remained eerily quiet. The US death toll climbed to 40, many of the victims killed by falling trees, and rescue work continued.

The storm that made landfall in New Jersey on Monday evening with hurricane force cut power to more than 8.2 million across the East and put the presidential campaign on hold just one week before Election Day.

New York was among the hardest hit, with its financial heart closed for a second day. The storm caused the worst damage in the 108-year history of the city's subway system, and New York City Mayor Michael Bloomberg said it could be four or five days before the biggest US transit system was running again.

"This was a devastating storm, maybe the worst that we have ever experienced," Bloomberg said.

But the full extent of the damage in New Jersey was being revealed as morning arrived. Emergency crews fanned out to rescue hundreds.

A hoarse-voiced New Jersey Gov. Chris Christie gave bleak news at a morning news conference: Seaside rail lines washed away. No safe place on the state's barrier islands for him to land. Parts of the coast still under water.

"It is beyond anything I thought I'd ever see," he said. "It is a devastating sight right now."

The death toll from Sandy in the US included several killed by falling trees. Sandy killed 10 people in New York City. It also killed 69 people in the Caribbean before making its way up the Eastern Seaboard.

Some bridges into the city reopened at midday, but most major tunnels and bridges remained closed, as were schools and Broadway theaters. 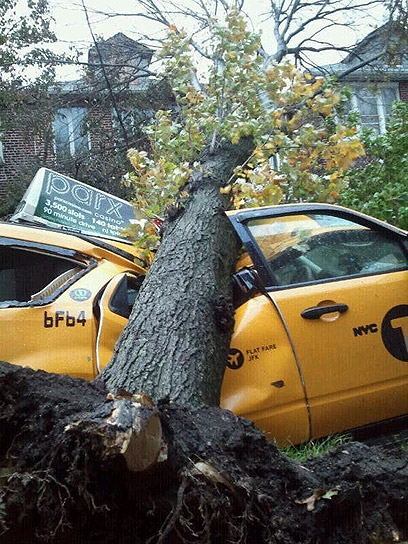 The storm sent a nearly 14-foot (4.27-meter) surge of seawater, a record, coursing over Lower Manhattan's seawalls and highways and into low-lying streets. The water inundated tunnels, subway stations and the electrical system that powers Wall Street and sent hospital patients and tourists scrambling for safety. Skyscrapers swayed and creaked in winds that partially toppled a crane 74 stories above Midtown. A large tanker ship ran aground on the city's Staten Island.

Around midday, Sandy was about 120 miles (190 kilometers) east of Pittsburgh in Pennsylvania, pushing westward with winds of 45 mph (72 kph), and was expected to make a turn into New York State on Tuesday night. Although weakening as it goes, the storm will continue to bring heavy rain and flooding, said Daniel Brown of the National Hurricane Center in Miami. Sandy also brought blizzard conditions to West Virginia and neighboring Appalachian states, with more than 2 feet (0.61 meters) of snow expected in some places.

Sandy will end up causing about $20 billion in property damage and $10 billion to $30 billion more in lost business, making it one of the costliest natural disasters on record in the US, according to IHS Global Insight, a forecasting firm. 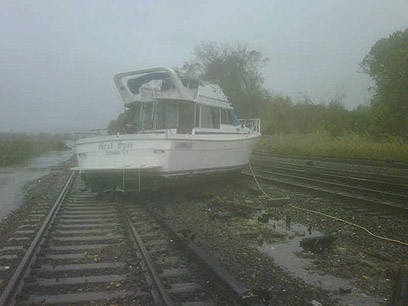 President Barack Obama declared a major disaster in New York and Long Island, making federal funding available to residents of the area. He suspended campaigning for a third day Wednesday, and planned to join Christie in viewing the damage in New Jersey.

Obama, speaking during a stop Tuesday at Red Cross headquarters, warned the public that the massive storm that struck the East Coast "is not yet over." He said there were still risks of flooding and downed power lines. He called the storm "heartbreaking for the nation."

The president offered his thoughts and prayers to those affected and told them "America is with you." He said he also told government officials coordinating the response that there was "no excuse for inaction."

And he said he told governors in affected areas that if they get no for an answer, "they can call me personally at the White House." Water cascaded into the gaping, unfinished construction pit at the World Trade Center, and the New York Stock Exchange was closed for a second day, the first time that has happened because of weather since the Blizzard of 1888. The NYSE said it will reopen on Wednesday.

A fire raged in a neighborhood Tuesday morning in the borough of Queens, near the Atlantic Ocean, with 80 to 100 homes destroyed but no deaths reported.

"This will be one for the record books," said John Miksad, senior vice president for electric operations at Consolidated Edison, which had more than 670,000 customers without power in and around New York City.

In New Jersey, where the superstorm came ashore, Sandy cut off barrier islands, swept houses from their foundations and washed amusement pier rides into the ocean. It also wrecked several boardwalks up and down the coast, tearing away a section of Atlantic City's world-famous promenade. Atlantic City's 12 waterfront casinos came through largely unscathed.

A huge swell of water swept over the small town of Moonachie, and authorities struggled to rescue about 800 people, some of them living in a trailer park. Police and fire officials used boats to try to reach the stranded. 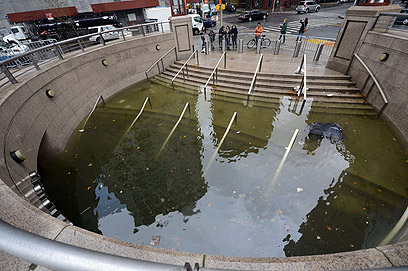 The massive storm reached well into the Midwest with heavy rain and snow. Chicago officials warned residents to stay away from the Lake Michigan shore as the city prepared for winds of up to 60 mph (96 kph) and waves exceeding 24 feet (7.2 meters) well into Wednesday.

Curiosity turned to concern overnight as New York City residents watched whole neighborhoods disappear into darkness as power was cut. The World Trade Center site was a glowing ghost near the tip of Lower Manhattan. Residents reported seeing no lights but the strobes of emergency vehicles and the glimpses of flashlights in nearby apartments. Lobbies were flooded, cars floated and people started to worry about food.

As Hurricane Sandy closed in on the Northeast, it converged with a cold-weather system that turned it into a monstrous hybrid of rain and high winds – even bringing snow in West Virginia and other mountainous areas inland.

Just before it made landfall, forecasters stripped Sandy of hurricane status, but the distinction was purely technical, based on its shape and internal temperature. It still packed hurricane-force winds. 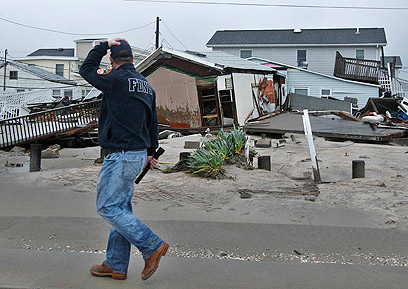 While the hurricane's 90 mph (144 kph) winds registered as only a Category 1 on a scale of five, it packed "astoundingly low" barometric pressure, giving it terrific energy to push water inland, said Kerry Emanuel, a professor of meteorology at MIT.

New York University's Tisch Hospital was forced to evacuate 200 patients after its backup generator failed. NYU Medical Dean Robert Grossman said patients – among them 20 babies from the neonatal intensive care unit who were on battery-powered respirators – had to be carried down staircases and to dozens of ambulances waiting to take them to other hospitals.

A construction crane atop a $1.5 billion luxury high-rise overlooking Central Park collapsed in high winds and dangled precariously. Thousands of people were ordered to leave several nearby buildings as a precaution.

Bloomberg told reporters that the storm deaths were tragic but said the city pulled through better than some people expected, considering the magnitude of the storm.

The mayor said: "We will get through the days ahead by doing what we always do in tough times – by standing together, shoulder to shoulder, ready to help a neighbor, comfort a stranger and get the city we love back on its feet."

The storm has all but crippled the race for the White House. Obama will stay in Washington on Wednesday to oversee the response to Hurricane Sandy, canceling another day of campaigning, the White House said.

Obama will be in Washington to "monitor the response to Hurricane Sandy and ensure that all available federal resources continue to be provided to support ongoing state and local recovery efforts," White House spokesman Jay Carney said in a statement.

Republican presidential candidate Mitt Romney on Monday canceled some of his political events,

but resumed his campaign on Tuesday, with plans to turn a rally in Ohio into a "storm relief event." He is set hold rallies in Florida – another critical battleground state – on Wednesday.

Sandy was expected to wreak havoc on the early voting process.