PM at Jewish school in Toulouse: Nation of Israel lives

"I came here from Jerusalem, the eternal capital of Israel, to say together with you against all of the enemies of Israel, three distinct words: Am Yisrael Chai (nation of Israel lives)," Prime Minister Benjamin Netanyahu said during a memorial ceremony in Toulouse, France Thursday in honor of the four Jews who were murdered in a terror attack on a local school eight months ago.

"Let's sing it out loud so that our voices will be heard in Toulouse, Burgas, Mumbai, Buenos Aires, schools in Maalot, the Dolphinarium in Tel Aviv, the Fogel family in Itamar. Am Israel Chai," the Israeli leader said. 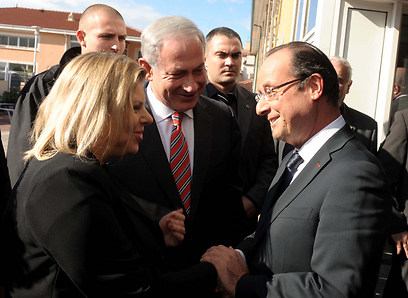 "The barbaric hatred of the murderers threatens not only Jews but all of humanity," Netanyahu said during the ceremony at the Ohr HaTorah School, where the Jews were shot to death by 23-year-old Frenchman Mohamed Merah.

"During the dark days of the Nazis and the pogroms that preceded them, most of the governments in Europe did not lift a finger to fight the murderous anti-Semitism, and some (governments) even cooperated with (it)," Netanyahu said.

"However, today the French president is standing beside me, speaking firmly against anti-Semitism and acting against it with resolve," he said.

The Israeli premier said Hollande's presence "expresses the spirit of the renaissance, the spirit of resistance to evil and tyranny. Mr. President, like your predecessors, you said yesterday that those who harm Jews harm all of France. And this is exactly what history has shown us. History has taught us that the anti-Semitism plague begins with attacks on Jews but quickly spreads and hurts others. 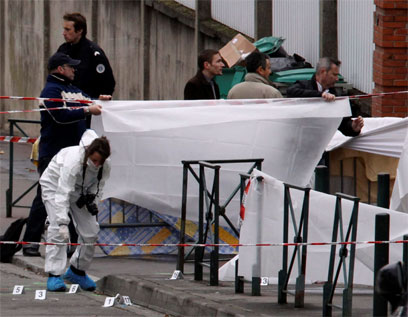 Tears flowed and both pain and hope were palpable at the ceremony in Toulouse, where a radical Islamist Frenchman targeted the school in March, shooting an 8-year-old girl in the head and spreading blood on the schoolyard before getting on his motorbike and driving away. Among the dead were a rabbi and his two young sons and, in an earlier shooting, three French paratroopers, two of North African descent and one from the Antilles.

"Anti-Semitism turns into a fire that quickly engulfs all in its path. It was no coincidence that the murderer of Toulouse killed not only Jews but also French soldiers, Christian and Muslim, with no distinction," Netanyahu said. "This murderer would have killed each Jewish child who crossed his path, exactly like the Nazis. But there are immense differences between the murder of Jews in the past century and those of today."

France has struggled with anti-Semitic attacks in the months since the attack.

French President Francois Hollande said the visit to the school was a way to demonstrate France's determination to fight hatred toward Jews.

"There is anti-Semitism, we must chase it down, pursue it, eradicate it," Hollande said. "When a citizen, because he is Jewish, sees his security threatened, it is the whole nation that is attacked.

Hollande pledged "no weakness" against terrorism and said fighting anti-Semitism is "a national cause."

Anti-Semitism "will be chased out everywhere ... in particular on social networks where anonymity is granted to hatred," he said. He also pledged to protect Jewish children and all those targeted for their religion.

Netanyahu's speech ended with children from the school joining him on stage, the crowd clapping and singing "Israel will live!" 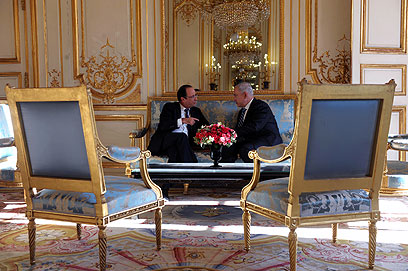 On Wednesday, after meeting Hollande in Paris, Netanyahu said, "It goes without saying that successive French governments have fought very clearly against anti-Semitism."

The March 19 attack on the Toulouse school, then called Ozar Hatorah but since renamed Ohr Tora, stunned France with its calculated brutality against unsuspecting schoolchildren heading to class on a Monday morning.

Merah entered the school and fired directly at children. He chased down 8-year-old Miriam Monsonego, grabbed her and shot her in the head.

A father and two of his children were also killed: Rabbi Jonathan Sandler, 30, and his sons 4-year-old Gabriel and 5-year-old Arieh.

The victims had joint French and Israeli citizenship, and were buried in Israel.

The attacks raised questions about France's counterterrorism efforts, after authorities acknowledged that Merah had been under surveillance and traveled to Afghanistan and Pakistan for apparent militant training.

Since March, French officials and France's Jewish community have been on alert.

Thursday's tribute came the day after a radical Muslim preacher was expelled from France because of his anti-Semitic speeches, calls for violent holy war and defense of violence toward women. The Interior Ministry said Mohamed Hammami of the Omar Mosque in Paris was expelled to his native Tunisia for his "deliberate, repeated and unacceptable provocations," which constitute a threat to France's society and security.

Earlier this month, the government said it dismantled a network of French-born Islamists bent on targeting Jews, after a firebomb attack on a Jewish grocery.