Hezbollah under fire, but its hold is tight

A maze of military bunkers and tunnels carved into a mountain near the border with Israel hints at why the Shiite Hezbollah movement is unlikely to lose its grip in Lebanon despite the setbacks it has suffered because of the civil war in neighboring Syria.

Mleeta, a former staging ground for Hezbollah's battles with Israel that has been turned into a sprawling tourist attraction, is emblematic of the base of its power: its arsenal and military prowess.

That base ultimately remains firm, even if Hezbollah has faced sharper criticism among Lebanese for its siding with Syria's regime in the civil war and even if it has reportedly suffered some reduction in aid from its top patron, Iran, squeezed by Western sanctions. Besides its weapons, Hezbollah can also still count on an extensive patronage network, carefully nurtured alliances with religious minorities and alternative sources of funding.

Its backing among Lebanon's Shiite Muslims – who edge out Sunnis and Christians as the country's largest sectarian community – remains strong, and it also dominates the government in place since January 2011. 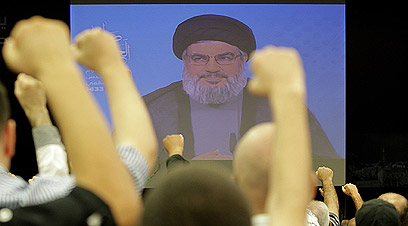 Even one of the militia's most outspoken critics in the Shiite community said he expects Hezbollah to remain dominant for the time being, even as support for it is eroding.

"Hebzollah still has the means of power, which is weapons, money and the support of the Lebanese government," said Ali al-Amin, a former top cleric in the southern city of Tyre who said he was expelled from his office by Hezbollah agents in 2008.

Certainly, Hezbollah is facing harder times. Misgivings have been growing among some Lebanese that the group is a destabilizing force because of a series of events in recent years. It was implicated by international investigators in the 2005 assassination of Prime Minister Rafik Hariri – though it denies a role. It fought a devastating war with Israel in 2006. Its fighters overran the streets of Beirut in a 2008 power struggle. And now it has rushed to back Syrian President Bashar Assad since the uprising against his rule began 19 months ago.

"Politically, they are on the ropes," analyst Matthew Levitt of the Washington Institute for Near East Policy said of Hezbollah. "You see a willingness to challenge Hezbollah that you have never seen before."

The latest political crisis in Lebanon, set off by the assassination of a top intelligence chief by an Oct. 19 car bomb, highlighted both Hezbollah's entrenchment and the backlash against it. 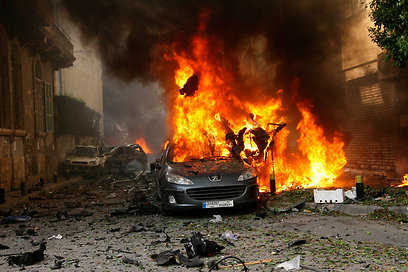 The country's Western-backed opposition, the March 14 alliance, has blamed Hezbollah and Syria for the killing of Gen. Wissam al-Hassan, a leading anti-Syrian voice, and has demanded the Hezbollah-dominated government resign. Hezbollah has denied involvement in the attack.

"It's a mafia state," Nadim Koteich, a prominent March 14 activist and TV talk show host, said of Hezbollah's domination of Lebanon. Opposition figures allege al-Hassan was targeted because he uncovered information about purported Syrian attempts to further destabilize Lebanon with the help of Lebanese collaborators.

But at the same time, the Sunni-dominated March 14 has failed to galvanize supporters. After the general's Oct. 21 funeral, only a few dozen March 14 activists tried to storm the castle-like Cabinet building, which has since been declared a no-go zone, ringed by barbed wire barriers and rows of army trucks.

Some blame lack of leadership. Former Prime Minister Saad Hariri, leader of Lebanon's Sunni Muslim camp and son of Rafik Hariri, has spent most of his time in Paris since Hezbollah brought down his pro-Western ruling coalition.

Since last month's assassination, US and European diplomats have met with Lebanon's leaders and called for stability. US Secretary of State Hillary Rodham Clinton said the Lebanese people deserve a government that is not a proxy for outside forces, a clear shot at Hezbollah, but she did not signal further practical moves.

That suggests the West does not see Hezbollah's predicament as an opening for challenging the group and wants to avoid a political crisis in Lebanon at a time when it's preoccupied with the Syria conflict, said Bilal Saab, an analyst at the Monterey Institute for International Studies.

"There will be a time when Hezbollah will be confronted, but this is not it," he said.

In response to domestic criticism, Hezbollah often plays the "resistance card," trying to draw political legitimacy from its combative stance toward Israel. The "Resistance Tourist Landmark" in the village of Mleeta is an outdoor shrine to Hezbollah's battle against Israel's 18-year military presence in Lebanon, which ended in 2000 when Israeli forces withdrew from a zone they controlled in the south. 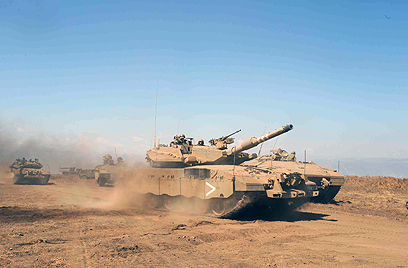 A Hezbollah activist who serves as a volunteer tour guide at the site spoke dismissively of Lebanon's opposition.

"If you take a look at their numbers, they are very weak and small," he said, speaking on condition of anonymity because he was expressing his personal view, not Hezbollah's official position.

The site, which was turned into a resistance museum in 2010, includes trenches covered by camouflage netting, a 200-meter-long tunnel and bunkers used by fighters at the time.

In one huge victory tableau, an Israeli Merkava tank is half-submerged into the ground. Hebrew letters in stone next to it read, "the Lebanese mud," a mocking reference to the phrase Israelis themselves use to describe their costly military entanglement across their northern border.

In its latest show of taking on Israel, the terrorist group sent an Iranian-made drone on a reconnaissance flight over Israel earlier this month.

Israel shot down the plane near its Dimona nuclear reactor in the south, but an Iranian lawmaker later said Tehran was able to obtain images of Israeli military bases.

In the 2006 war, Hezbollah forces battled Israel's military to a standstill, winning it support across the Arab world, even among Sunnis. That has diminished because of the Syria conflict. But among some, its resistance credentials trump its alliance with a dictator trying to crush a Sunni-led rebellion among some.

That's particularly the case in southern Lebanon, where residents still nurse bitter memories of Israel's invasion in the early 1980s.

In Sidon, a Sunni stronghold in the mainly Shiite south, Mohieddine Sin, a 56-year-old Sunni smoking a waterpipe in a boardwalk cafe, said he supports Hezbollah regardless of its actions in Syria. "Whoever is against Israel, we are with them," he said.

Hezbollah would suffer a serious blow if Assad were to fall, but likely not a fatal one. 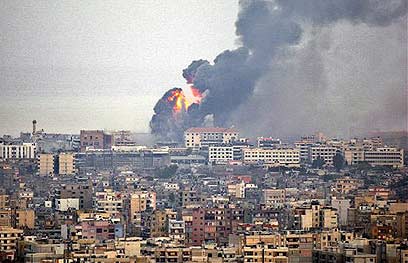 It has done well by Lebanon's Shiites and built alliances with Christian and Druze politicians. The militia can likely count on continued support from Iran, which would want to protect its strategic proxy on Israel's doorstep, particularly if Assad is toppled. And even if a post-Assad leadership were to prevent more Iranian weapons from being shipped to Hezbollah, the militia already has a huge arsenal of tens of thousands of missiles, according to Israeli estimates.

Saab, the analyst, said Hezbollah remains in good shape, provided it does not get into another major war with Israel.

"Hezbollah is going to come out on top, not matter what," he said.