President Barack Obama rolled to re-election and a second term in the White House on Tuesday with a clear victory over Republican challenger Mitt Romney as the Democrat overcame deep doubts about his handling of the US economy.

In a victory speech on Wednesday, Obama said the American people have "picked ourselves up" and fought back during tough economic times, declaring after that the "best is yet to come."

Obama said he wants to meet with Republican rival Mitt Romney to discuss how they can work together. He says they may have "battled fiercely, but it's only because we love this country deeply." Romney called Obama to concede after the president's victories in the crucial state of Ohio and heavily contested swing states of Virginia, Nevada, Iowa and Colorado carried the Democrat past the 270 electoral votes needed for victory. The president won at least 303 electoral votes, CNN reported.

"This is a time of great challenge for our nation," Romney told disappointed supporters gathered at a Boston convention center. "I pray that the president will be successful in guiding our nation."

He warned against partisan bickering and urged politicians on both sides to "put the people before the politics." Obama, America's first black president, won by convincing voters to stick with him as he tries to reignite strong economic growth and recover from the worst recession since the Great Depression of the 1930s. An uneven recovery has been showing some signs of strength but the country's 7.9% jobless rate remains stubbornly high.

Obama's victory in the hotly contested swing state of Ohio – as projected by TV networks – was a major step in the fight for the 270 electoral votes needed to clinch the White House and ended Romney's hopes of pulling off a string of swing-state upsets. 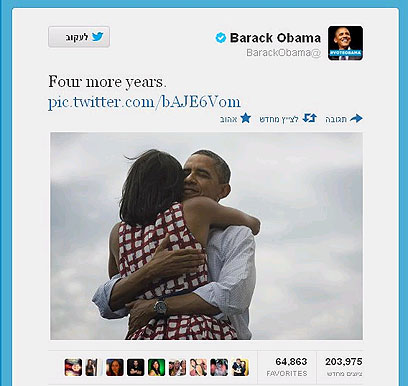 Obama scored narrow wins in Ohio, Wisconsin, Iowa, Pennsylvania and New Hampshire – all states that Romney had contested – while the only swing state captured by Romney was North Carolina, according to television network projections. Romney delayed his concession as some Republicans questioned whether Obama had in fact won Ohio despite the decisions by election experts at all the major TV networks to declare it for the president.

The later addition of Colorado and Virginia to Obama's tally – according to network projections – meant that even if the final result from Ohio were to be reversed, Romney still could not reach the needed number of electoral votes in America's state-by-state system of choosing a president.

While Obama supporters in Chicago were ecstatic, Romney's Boston event was grim as the news was announced on television screens there. A steady stream of people left the ballroom at the Boston convention center. At least 120 million American voters had been expected to cast votes in the race between the Democratic incumbent and Romney after a campaign that was focused on how to repair the ailing US economy.

The same problems that dogged Obama in his first term are still there to confront him again.

He faces a difficult task of tackling $1 trillion annual deficits, reducing a $16 trillion national debt, overhauling expensive social programs and dealing with a gridlocked US Congress that kept the same partisan makeup.