Iran repelled an unidentified aircraft violating its airspace, it said on Friday, after Washington reported a US surveillance drone was shot at by Iranian warplanes last week.

Defense Minister Brigadier General Ahmad Vahidi appeared to be referring to the US drone which the Pentagon said had not entered Iranian territory. The incident has underlined the risk of US-Iranian tensions escalating into a military clash.

"Last week an unidentified plane entered the airspace above the territorial waters of the Islamic Republic of Iran in the Persian Gulf which, due to the timely, quick and decisive action of the Iranian Armed Forces, was forced to flee," Iran's state-run Press TV quoted Vahidi as saying.

Vahidi said Iran was investigating the incident and pursuing the case via international channels.

Iran's Fars News Agency said the aircraft was "shooed away" by Iranian fighter jets, but it did not elaborate. 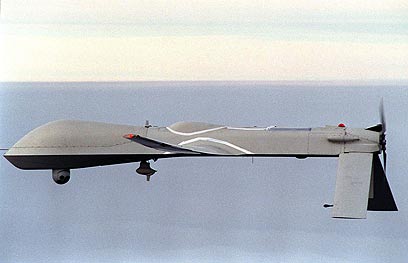 Earlier on Friday, General Massoud Jazayeri, a senior military commander, said Iranian forces were prepared to respond to any incursion by air, sea or land, without specifically mentioning the drone incident, Fars reported.

On Thursday, US officials said the unarmed Predator drone was in international airspace on Nov. 1 when Iranian warplanes opened fire on it. The aircraft was not hit.

It was believed to be the first time that Tehran has fired at an unmanned US aircraft in their 33-year stand-off.

Washington accuses Iran of pursuing nuclear weapons capability and has not ruled out military action if it considers Tehran close to getting the bomb. Iran, which denies seeking atomic arms, is resuming talks with the UN nuclear agency in December.

According to the Pentagon, two Soviet-designed SU-25 aircraft intercepted the Predator over Gulf waters about 16 nautical miles off the Iranian coast; international airspace begins at 12 nautical miles.

After firing at the drone, the Iranian planes followed it for several miles as it moved further from Iranian airspace, the Pentagon said. Washington has issued a diplomatic protest to Iranian authorities.

News of the incident emerged ahead of large-scale air defensfe drills Iran has planned across several eastern provinces in coming days.

The "Velayat 4" manoeuvres will be jointly held by the regular armed forces and the Islamic Revolutionary Guard Corps, and will test new radar and surveillance equipment, Iranian military commanders said.

On Tuesday this week, Iran impounded a Saudi Arabian fishing vessel that entered its southern territorial waters, according to Press TV.

It did not give details of the incident, but fishermen and traders from the two countries, on opposite sides of the Gulf, sometimes stray into each other's waters.