Op-ed: Soldiers killed in ground offensive on eve of elections would be catastrophic for Netanyahu

In political terms, a military maneuver is always risky. What appears in the beginning as a glorious move may turn out to be an electoral disaster. This is why most politicians hate launching a military campaign on the eve of elections. A military operation entails giving up control. The candidate's fate is in the hands of others – a pilot's error, a rocket that lands on a day care center, civilians not following safety guidelines.

Operation Pillar of Defense was received with almost unanimous public support, but Netanyahu has no guarantee that this situation will continue. Some 80% of Israelis supported the Second Lebanon War when it began. Most of that support was gone by the time the war ended.
Southern Front
War of attrition in Gaza
Ron Ben-Yishai
Analysis: Terror organizations have learned their lesson from Cast Lead, Second Lebanon War
War of attrition in Gaza
The agenda changes: Social issues are pushed aside as security takes over. Iran is pushed aside, the Palestinians return to the forefront. This is bad for Shelly Yachimovich's Labor Party and it is bad for Yair Lapid. In theory, it is good for Olmert and Livni. An unstable security situation is good for the Right when the Right is in the opposition. Then it can deliver fiery speeches without having to bear any of the responsibility. When the Right is part of the coalition the situation becomes more complex. One can examine the differences between the lofty declarations and the actions themselves. It can be attacked from the right over what it failed to achieve, or from the left over the non-existent international umbrella. Rabin defeated Shamir in 1992 after he succeeded in presenting himself as being more security-oriented than Likud. The voters hate seeing headlines about casualties, particularly when the casualties are soldiers. In this regard, there is no major difference between the two camps: Menachem Begin's political career ended in 1984 because of the large number of casualties in Lebanon; Olmert's came to a grinding halt in 2006 for the same reason. Only a month ago Netanyahu attacked Olmert for launching two unnecessary wars while stressing that he himself did not launch any wars during his two terms as prime minister. But Netanyahu did not take the internal dynamics in the south into account. He was not drawn to this war, but the war drew him in. Netanyahu will make every effort to avoid a ground offensive. Soldiers are killed during a ground offensive, and that is bad. On the eve of elections, it is a catastrophe. 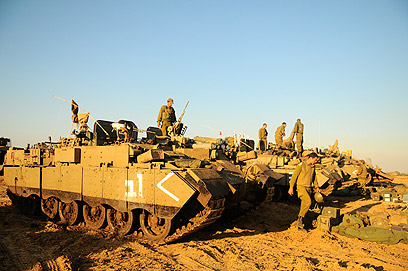 Even prior to the operation in the south, Netanyahu went to great lengths to patch things up with Obama. He sent envoys, held talks, and offered to reignite the peace process. This is understandable: Netanyahu made a mistake, and now he is trying to fix it. It's a shame that he is going about it in such a clumsy manner.

Somehow, the operation in Gaza corresponds with the Palestinians' request to be accepted as a non-member state in the UN. The Israeli government will have a hard time fighting on two fronts simultaneously: Recruiting the world against Abbas due to his UN bid and recruiting the world against his rivals in Gaza. The third front – Iran – is approaching from behind. The government is asking a lot of the world, but it is offering nothing in return. In the meantime, Palestinian Prime Minister Salam Fayyad is calling his friends in Washington and asking them for a ladder in order to climb down from the tree: He knows that Congress plans to respond to the UN vote on the Palestinian request by stopping the transfer of all aid funds to the Authority and withdraw American funding from the UN. If this happens, the PA will collapse. PA officials have quietly hinted to Israel that when they are recognized by the UN as a state they will not exercise their right to sue Israel at the International Criminal Court in The Hague. The possibility of being sued concerns Israel more than the recognition of the PA as a state. It is doubtful that the Palestinian overtures will yield any results, and in any case, Congress will stop the transfer of funds.