'We'll get to it.' Lieberman

A long period of calm will prevail in Israel in the aftermath of Operation Pillar of Defense against terrorists in Gaza, Foreign Minister Avigdor Lieberman said Tuesday evening.

Speaking at Ynet's studio, Lieberman addressed the possibility of a ceasefire, which Hamas said may go into effect at midnight. He said Israel would be pleased if a ceasefire is reached, but would continue to act if not.

Asked about what Israel's citizens should expect in the post-ceasefire era, Lieberman said "I estimate that we will get a lasting calm. We spoke with our colleagues around the world and explained that we want lasting quiet – not for a week, not for two weeks. After a week of suffering, (we want) at least five or six years of quiet, stability and security."

Asked about the possibility of overthrowing the Islamist Hamas regime in Gaza, the FM said, "We'll get to it."

Addressing the government's apparent decision not to launch a ground offensive in Gaza, Lieberman said, "My approach is simple – if our forces enter Gaza, we must go all the way. In Operation Cast Lead we invaded and paid a heavy price as far as global public opinion is concerned and the various Goldstone reports. "The government cannot take such a decision (invasion) two months before elections," Israel's top diplomat said. "We should leave this decision for the next government. 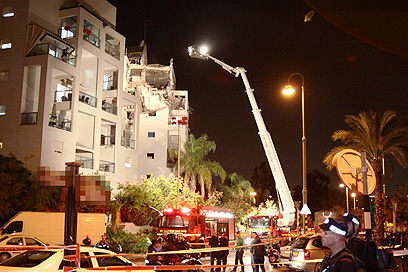 "We have no interest in escalating the situation in the Gaza Strip. Unfortunately, we withdrew (from Gaza) – we fled without guaranteeing our security interests."

Earlier Tuesday, A Hamas member said on Tuesday Egypt had brokered a Gaza ceasefire deal that would go into effect within hours, but a spokesman for Israeli Prime Minister Benjamin Netanyahu said "we're not there yet." "An agreement for calm has been reached. It will be declared at 9 o'clock (1900 GMT) and go into effect at midnight (2200 GMT)," Hamas' Ayman Taha told Reuters from Cairo, where intensive efforts have been under way to end seven days of fighting.

"We're not there yet," Regev said on CNN. "The ball's still in play." Terrorists in Gaza have fired dozens of rockets at Israel throughout the day. Several people were injured, and an IDF soldier was killed during one of the attacks on Israel.