Egypt's president on Thursday issued constitutional amendments granting himself far-reaching powers and ordering the retrial of leaders of Hosni Mubarak's regime for the killing of protesters in last year's uprising.

Mohammed Morsi decreed immunity for the panel drafting a new constitution from any possible court decisions to dissolve it. He granted the same protection to the upper chamber of parliament, which is largely toothless. Both bodies are dominated by Morsi's Islamist allies.

Several courts are currently looking into cases demanding the dissolution of both bodies. Parliament's lower chamber, also dominated by Islamists, was dissolved in June by a court decision on the grounds that the rules governing its election were illegal.

The Egyptian leader also decreed that all decisions he has made since taking office in June and until a new constitution is adopted are not subject to appeal in court or by any other authority, a move that places Morsi above oversight of any kind. He already has legislative powers after the powerful lower chamber was dissolved days before he took office June 30. 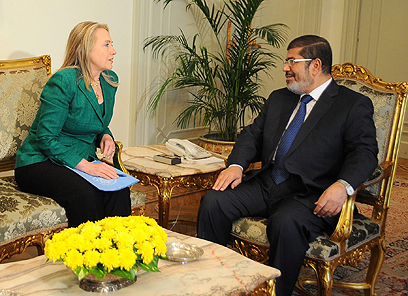 The decree for retrials appeared aimed at launching a new prosecution of Mubarak. It says those who held "political or executive" positions in the former regime would be affected. Mubarak was convicted in June to life in prison for failing to stop the killing of protesters during last year's uprising against his rule, but many Egyptians were angered that he wasn't convicted of actually ordering the crackdown and that his security chief, Habib el-Adly, was not sentenced to death. Several top police commanders were acquitted, and Mubarak and his sons were found not guilty of corruption charges.

Morsi's decrees came as thousands of demonstrators gathered in downtown Cairo for the fourth day running to protest against Morsi's policies and criticize the Muslim Brotherhood, the fundamentalist group from which the Egyptian leader hails. They come one day after he won lavish praise from US President Barack Obama and Secretary of State Hillary Rodham Clinton for mediating an end to eight days of fighting between Israel and Gaza's Hamas rulers, whose parent group is the Brotherhood.

Morsi also on Thursday fired the country's top prosecutor by decreeing with immediate effect that he could only stay in office for four years. Abdel-Maguid Mahmoud has been in the job for close to a decade. Morsi fired Mahmoud for the first time in October, but had to rescind his decision when he found that the powers of his office do not empower him to do so.

Mahmoud, a Mubarak-era appointee, has faced widespread accusations that his office did a shoddy job collecting evidence against dozens of police officers who were tried and acquitted on charges of killing protesters during the uprising.

Opposition figure and Nobel laureate Mohamed ElBaradei wrote on his Twitter account that "Morsi today usurped all state powers and appointed himself Egypt's new pharaoh. A major blow to the revolution that could have dire consequences."