A leading human rights group on Friday accused Israel of violating the laws of war when it killed 12 civilians in an airstrike during its recent conflict with Palestinian terrorists in Gaza.

Israel's army countered that Palestinian terrorists were to blame for hiding in civilian buildings.

Israel launched its air assault on Gaza last month to try to stop frequent rocket barrages at southern Israel. The conflict ended after eight days with an Egyptian-brokered truce.

During the fighting in mid-November, the Israeli air force attacked the home of the Daloo family in Gaza City, killing 10 family members - including women and children - and two other civilians.

A military spokesman initially said it was targeting a senior member of the Hamas armed wing, whom he identified as Yahia Abayah, but the military later announced the airstrike had killed Mohammed Daloo, calling him a Hamas terrorist.

Human Rights Watch said neither Abayah nor Daloo were listed as killed on the websites of Hamas and Islamic Jihad's armed wings, which posts the names of its fighters killed in conflict.

The rights group said Daloo's police commander said Daloo was a low-ranking civilian police officer serving in a unit that protects Gaza government figures and visiting officials, and was not a member of an armed group.

"Even if (the police officer) was a legitimate military target under the laws of war, the likelihood that the attack on a civilian home would have killed large numbers of civilians made it unlawfully disproportionate," the Human Rights Watch said in a statement.

The group called on Israel to explain why it targeted a home full of civilians. 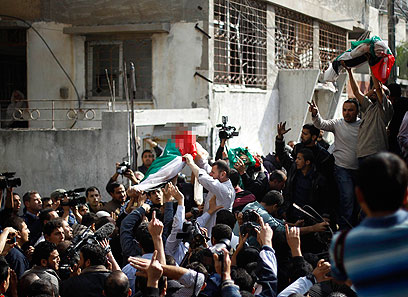 In a statement on Friday, Israel's army said the Daloo home was a hideout for a senior Hamas terrorist involved in rocket attacks. It did not name the terrorist.

The army said it worked to minimize noncombatant casualties, making phone calls to Gaza residents warning them of airstrikes in the area, dropping leaflets from warplanes instructing them to get away from Hamas operatives and broadcasting warning messages on the radio.

It said it targeted only those sites associated with terrorist activity, based on Israeli intelligence collected for months. Civilians were never a target, it said.

"While the loss of life on both sides is regrettable, responsibility ultimately lies with terror operatives who render the civilian population a human shield by using civilian buildings as hideouts or weapon depots," the army statement said.

Hebron is divided into Israeli and Palestinian-controlled sections. More than 600 Jews, among the most hardline in the West Bank, live there in heavily guarded enclaves in the middle of the city of about 170,000 Palestinians. There is nearly constant tension between the two sides.

According to Israeli media, Palestinian policemen tried to block Israeli soldiers from entering a part of Hebron, and when Israeli soldiers objected, the two sides began pushing each other.

The army said 250 Palestinians gathered and threw rocks toward the Israeli soldiers, who responded with riot dispersal means, not live fire.

The Israeli military said it is investigating the matter.