Dominique Strauss-Kahn and a New York hotel maid who accused the former International Monetary Fund chief of sexually assaulting her agreed on Monday to settle her civil lawsuit against him for an undisclosed sum, ending one chapter of a scandal that cost him his job and derailed his political career in France.

At a brief hearing in New York State Supreme Court in the Bronx, Justice Douglas McKeon said the terms of deal, which includes settlement of a countersuit filed by Strauss-Kahn, would remain confidential.

Strauss-Kahn, 63, was not required to appear in New York and remained in Paris. His accuser,  Nafissatou Diallo, was present as the judge had ordered, wearing a green blouse with black pants and a gray and white scarf around her head.

"I thank everybody, and I thank God," Diallo said in a brief statement outside the courthouse after the hearing. "Ms. Diallo is a strong and courageous woman who never lost faith in our system of justice. With this resolution, she can now move on with her life and we thank everyone for their support and prayers," her lawyer, Kenneth Thompson, said.

Strauss-Kahn's New York lawyers, William Taylor and Amit Mehta, said in an emailed statement: "On behalf of Mr. Strauss-Kahn, we are pleased to have arrived at a resolution of this matter. We are grateful to Judge McKeon whose patience and forbearance allowed this agreement to be formulated."

The agreement ends Strauss-Kahn's US legal woes, but he faces more court dates in France.

The US scandal erupted in May 2011 when Diallo, 33, told police that Strauss-Kahn attacked her in his suite at the Sofitel Hotel in Manhattan. She alleged that a naked Strauss-Kahn emerged from the bathroom of his $3,000-a-night suite and forced her to perform oral sex.

The accusation led to a frantic scramble by police in New York to arrest Strauss-Kahn as he sat aboard a jet at John F. Kennedy International Airport waiting to take off for France.

The scandal forced Strauss-Kahn to resign as head of one of the world's most influential international finance organizations and wrecked his hopes of running for president in his native France.

Prosecutors initially expressed confidence in the evidence, including DNA that showed a sexual encounter. But they dropped the case in August 2011 after developing concerns about Diallo's credibility, including what they said were inconsistencies in her account of what happened immediately following the incident. 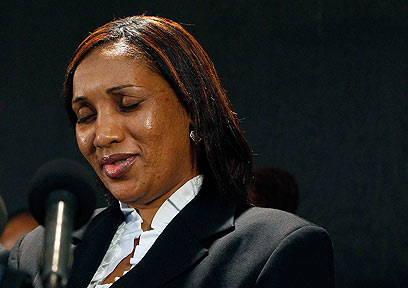 Judge McKeon said a separate lawsuit filed by Diallo against the New York Post over the tabloid's report that she was a prostitute had been settled as well. Terms of that were also not released.

Accusers in such cases often hide from the glare of publicity, and many media outlets, including Reuters, protect their identities by not revealing their names.

But Diallo, the daughter of an imam from Guinea, broke her silence in July 2011, while the criminal investigation was still active, revealing her identity in interviews to Newsweek and ABC News.

She filed her civil lawsuit just weeks before the charges were dismissed, claiming Strauss-Kahn forced her to perform oral sex and caused her physical and emotional damage.

Strauss-Kahn filed a countersuit against Diallo for defamation. He said the sexual encounter was consensual but admitted it was a "moral error."

The resolution of the civil case brings Strauss-Kahn closer to ending his legal troubles, which have persisted since his return to France after the initial incident.

He is awaiting a decision by a French court on his request to halt an inquiry into whether he should stand trial on pimping charges related to sex parties he attended with prostitutes. A court date in that matter is set for Dec. 19.

Meanwhile, Strauss-Kahn is quietly trying to resume his career, delivering speeches at private conferences in recent months and setting up a consulting firm in Paris.

If the reaction of some Parisians asked about the legal settlement in New York is any indication, Strauss-Kahn still faces a skeptical public in France.

"Just because he's got money he gets away with it," Bastien, an electrician in his 20s told Reuters TV. "If it had been anyone else they would have done time for this. It's not right."