The United States on Tuesday designated the radical Islamist Syrian rebel group Jabhat al-Nusra, an important element in the opposition struggle, as a foreign terrorist organization and said it was trying to hijack the rebellion on behalf of al-Qaeda in Iraq.

US officials said the al-Nusra group had claimed responsibility for carrying out nearly 600 attacks in major cities that have killed numerous innocent Syrians.

"Through these attacks, al-Nusrah has sought to portray itself as part of the legitimate Syrian opposition while it is, in fact, an attempt by AQI to hijack the struggles of the Syrian people for its own malign purposes," US State Department spokeswoman Victoria Nuland said in a statement.

Designating it as a terrorist group means US authorities can freeze any assets the group or its members have in US jurisdictions.  It also prohibits Americans from giving it any material support.

Tuesday's action came as US officials attend the Friends of Syria meeting in Marrakesh, Morocco, to discuss the 20-month-old crisis in Syria as rebels push forward on the battlefield and move to unify the political opposition.

Al-Nusra, one of the most efficient fighting groups in Syria, is not part of a new, Islamist-dominated military command elected in Turkey over the weekend.

Some other groups value it for its fighting prowess while others accuse it of indiscriminate tactics, such as poorly placed car bombs that have harm civilians. "They have their own leaders and their own structure, they fight side by side with the Free Syrian Army. We have only seen good things from them and they are good fighters," said Abdul Jabbar al-Oqaidi, a senior commander in the new group.

"Jabhat al-Nusra is one of the strongest forces fighting to get rid of the regime… I have never seen any attacks that could be considered a violation of civilians' rights. There has never been any proof of this," Samir al-Shami, an opposition activist in Damascus with the Syrian Youth Union told Reuters. 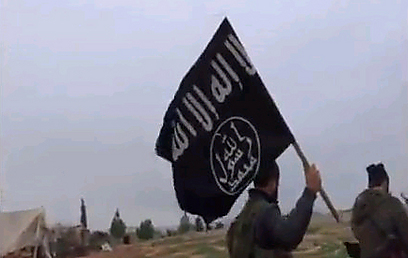 al-Nusra operatives (Screenshot)
Musaab Abu Qitada of the rebel group the Damascus Military Council, said groups like al-Nusra "have helped defend our children and have sacrificed their own lives for our families." But another activist who lives in Hama, who asked not to be named over concerns for his safety, welcomed the US action but said such groups are gaining a foothold in the absence of any other real military support. "I don't believe most Syrians want these radical groups. We are a conservative people but not extremists. I think Syrians have accepted them because they feel they have no other choice," the activist said. Separately, the Treasury Department moved to block the property of the Syrian government by sanctioning two militia groups that work under the Assad government, Jaysh al-Sha'bi and Shabiha. It also took action against two commanders of the Shabiha group: Ayman Jaber, who it said was working with the Assad forces to obtain weapons for the militia, and Mohammad Jaber, who helped transport Shabiha members to Turkey to attack Syrian rebels in the neighboring country.

The Treasury Department, in its statement, said the militias it is targeting are part of the Assad regime's campaign against Syrian citizens. Jaysh al-Sha'bi has ties to Iran and Hezbollah, it said.