After facing an onslaught of anti-Semitic and anti-Israeli incidents recently, Israeli officials in Denmark and Spain have decided to call for precautionary measures.

Israeli and Jewish officials in Denmark on Wednesday warned Jews to avoid openly wearing religious symbols and dress when moving about Copenhagen amid rising anti-Israeli sentiment.

"We advise Israelis who come to Denmark and want to go to the synagogue to wait to don their skullcaps until they enter the building and not to wear them in the street, irrespective of whether the areas they are visiting are seen as being safe," Israel's ambassador to Denmark, Arthur Avnon, told AFP.

Avnon added that visitors were also advised not to "speak Hebrew loudly" or demonstrably wear Star of David jewelry. 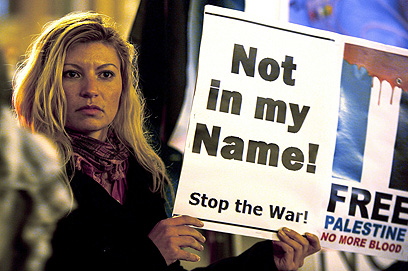 Denmark's national Jewish Religious Community organization has also advised its members, and those at the private Jewish school in Copenhagen, to exercise caution.

Caroline Jewish School headmaster Jan Hansen told daily Jyllands-Posten: "It is not something that we do officially, but if the issue comes up we would say (to our pupils) they should think twice before walking into certain areas of Copenhagen with a skull cap or Star of David."

The warnings come a few weeks after an attack on the Israeli embassy in Copenhagen in the wake of increasing cross-border tensions between Israel and Hamas in Gaza, and Israeli plans to expand settlements.

Some 20 demonstrators lobbed stones and fireworks at the embassy building on November 19. Graffiti with the word "childkillers" was painted on the embassy entrance wall.

No one was hurt in the incident and one person has since been charged in the attack.

Avnon said that after the attack, a lower-ranking officer from Denmark's foreign ministry had called the embassy offering to pay for some of the damage to the building, but that otherwise official Denmark had not reacted to the incident.

According to figures from the Jewish Belief Centre (Mosaisk Trossamfund), the organization has received 37 reports of anti-Jewish incidents this year, predominantly in the heavily immigrant Noerrebro neighborhood and around the Jewish synagogue in central Copenhagen.

Denmark's Jewish community is estimated at between 6,000 and 8,000 people.

Calls for boycott is Spain

In Spain, meanwhile, a low-profile campaign is seeking to boost the sales of a toy store that was the target of anti-Israel protests recently.

The Imaginarium chain found itself under attack recently because it sells Israeli-made products. Over the past two weeks anti-Israel activists have been arriving at its stores and affixing Israeli-made toys with stickers calling for a boycott of the Jewish state. They have also held rallies during which some protesters wielded signs bearing the word "childkillers."  The chain's management has recently gotten in touch with the Israeli embassy in Madrid and said it has not intention of cutting its business ties with Israel. In turn, the embassy has called on supporters of the Jewish state to buy their holiday presents at the store. The Israeli envoys further intend to petition the local authorities to cut funding to organizations responsible for the boycott.

AFP and Yigal Rom contributed to the report