Op-ed: Warm US embrace will quickly be replaced by cold shoulder if Hagel confirmed

On Monday US President Barack Obama nominated former Republican Senator Chuck Hagel as his next defense secretary – the first course of the bitter meal Obama plans to serve Prime Minister Benjamin Netanyahu. During the election campaign Obama kept a 'poker face' and did not respond to Netanyahu's blatant support for Republican candidate Romney. Now it is time to settle the score.

This does not mean that Obama's wish to 'punish' Netanyahu for intervening in the election race was a key factor in his decision to offer the Department of Defense to Hagel. This consideration was secondary, but it was significant enough to tip the scale.
US-Israel Ties
Israel's nightmare
Sever Plocker
Op-ed: Possible appointment of Hagel as defense secretary result of Bibi's support for Obama's rivals
Israel's nightmare

Hagel as defense minister is the ultimate nightmare of the rightist government which, according to the polls, is expected to be established in Israel following the January elections.

In the numerous interviews he has given, Hagel comes off as a conservative politician who is disgusted by what he views as the excessive influence of the American Jewish lobby, supports dialogue with Iran on the nuclear issue (he makes it a point not to mention the military option), is against tightening the sanctions and is willing to extend a hand of reconciliation to Hamas. 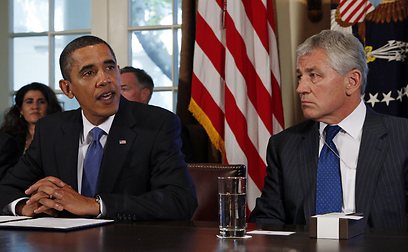 The liberal Jews in the American press are trying to calm me down, saying Hagel is not that bad and that his opinions are no different from those of former Mossad Director Ephraim Halevy. But they are being naïve. Even if Halevy and Hagel's views are similar, their basic interests are different. Halevy speaks as an Israeli patriot who is offering the government advice on how to improve Israel's situation, while Hagel speaks as a conservative American who has had it with the Israeli government's attempts to dictate US policy in the Middle East using the aggressive Jewish lobby.

If and when Hagel walks through the gates of the Pentagon, the appearance of close security relations between Israel and the US will remain, but behind closed doors things will begin to operate differently.

Unwritten agreements will dissipate; the close personal relations will be hurt; the extrabudgetary aide will decrease or maybe even disappear completely; and the warm embrace will quickly be replaced by a cold shoulder.

A nomination is not an appointment, and Senate Republicans will most likely throw every possible obstacle in Hagel's path to the Pentagon. As far as the Republicans are concerned, Hagel did an extreme about-face and is now part of the notorious leftist camp.

What is certain is that Netanyahu did not have the option of asking Obama to reconsider Hagel's nomination. He lost that privilege when he made the mistake of heading the anti-Obama camp during the 2012 elections; a mistake we are all paying for.