A 22-year-old woman was subjected to verbal abuse and humiliation by haredim while traveling on a bus from Jerusalem to Arad on Saturday evening, Yedioth Ahronoth reported.

Miri Bleicher, a counselor for Jewish youths visiting Israel, boarded the 555 Egged bus to Arad on Saturday evening after spending the weekend visiting friends in Jerusalem. The unpleasant experience had started even before she boarded the bus.

"The bus arrived but the driver didn't open the front door, it then pulled away and stopped. I chased after it, it pulled away again and then stopped, until the driver eventually opened the door," she recalls.

"When I got on the bus, I found myself in another world. On the front, four haredim were standing and inspecting me in a hostile manner. The driver promised them that after I paid I would enter through the backdoor," Miri says. 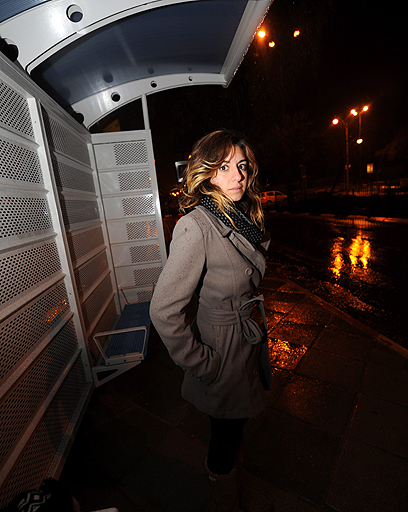 Bleicher: I was in tears the entire ride (Photo: Haim Hornstein)
At this point, she realized that the men were expecting her to sit in the back where all of the women were sitting. She refused to enter through the backdoor and bravely walked past the men who mumbled hateful slurs at her, including "shiksa." To avoid a confrontation she decided to sit in the back. "It was crowded because of all of the baby strollers; there was noise and babies were crying, so at one point I decided to stand up. The back was full of strollers so I stood in the middle of the bus, between the men and the women." Miri says the men sitting nearby made vomiting sounds and called her a "nuisance." She further claims that one of them approached her and shouted, "You're not respecting my rights." Paralyzed by fear, she didn't answer back. A short while later she came under attack by the women passengers. "They told me I wasn't Jewish and that I was trying to spite them," she says. The verbal abuse continued throughout the ride. "I was insulted the entire way and was in tears," she says. "No one helped me." The nightmare lasted an hour and a half, until the bus reached Arad. Before disembarking, Miri was again subjected to slurs and was spat on by one of the passengers. "I was shocked. I couldn't believe this could happen in my country."

Egged spokesman Ron Ratner said in response, "The driver welcomed the passenger in the appropriate manner and his behavior was without fault. She didn't seek out his help and he didn't notice what was going on between her and the passengers.

"Had she approached him he would have immediately stopped the harassment and might have even called the police."

Be Free Israel, a movement promoting freedom of religion in Israel, said: "We have been fighting women's exclusion for three years. Sadly, despite the High Court's rulings, we still get complaints of humiliation on buses."