A Shas campaign TV ad that complainants said included racist elements and mockery of olim was aired Wednesday evening for the last time.

The ad, titled "Dial conversion, get documentation," criticized expedited conversion procedures which Shas claims might come into being if the party will not be a coalition member. 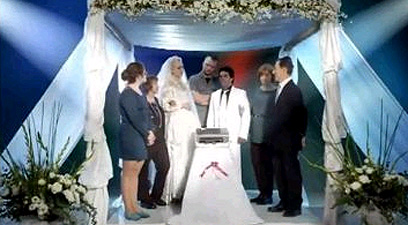 From the contested ad
The campaign ad presents a wedding ceremony in which the groom discovers that his bride, portrayed with a heavy Russian accent, is not Jewish, while a fax machine quickly prints out a conversion confirmation. "The ad is racist and portrays the olim in a mocking light," claimed a petition by MK Nino Abesadze, the Labor party's olim staff chairwoman. "It's hard to believe that such bigoted sentiments are given a stage in Israel, in 2013, at the tax-payers' expense." Abesadze claimed there are hundreds of thousands of Israelis who cannot marry due to the Chief Rabbinate's policy, adding that the Labor party abhors the ad. "The Labor party supports civil marriage and citizens' right for marriage in their country," the petition stated. "If the committee is interested, I'll be happy to explain how every second of the minute-long ad shows a racist and insulting depiction of olim."

Rubinstein: A sense of generalized abuse

Criticizing the advert, Rubinstein wrote: "I thought that a sense of generalized abuse could be felt, and should be avoided if possible." Given Shas' consent to the ad's removal, the petitions for its ban were rejected. Yisrael Beiteinu responded angrily to the campaign, saying that Shas "is losing its wits and lapsing into racism and incitement."

Minister Ariel Atias, who heads Shas' PR campaign, clarified that the party does not regret the campaign, and that the ad "achieves its goals and will therefore be aired again tonight. The affair around the campaign is our aim exactly.

"The ad is supposed to show the reality of fictitious conversions. A physician can't get a diploma by fax or expedited procedures, and no one should join the Jewish fold in such a manner." Atias added that "The ad isn't supposed to hurt anyone. There is no word in it against Russians or any hurtful remarks, but an emphasis on Shas' role in preventing legislation that will damage the state's Jewish identity. "We see it's effective and tens of thousands have already viewed the video on Youtube."