Hamas' flagship university in Gaza has a new diploma on offer – Hebrew, the official language of its arch-foe Israel.

Gaza's Hamas rulers say they want to produce qualified teachers as the government gradually introduces Hebrew studies in its high schools. The aim is simple: It wants Palestinians in Gaza to learn their enemy's language. "As Jews are occupying our lands, we have to understand their language," said Education Ministry official Somayia Nakhala.

There are 19 students enrolled in the first one-year Hebrew diploma course offered at the Islamic University in Gaza City, a stronghold of Hamas, the Islamic militant group that has ruled Gaza since 2007.

Hamas does not recognize Israel, is officially pledged to its destruction and has killed hundreds of Israelis in suicide bombings, rocket strikes and other attacks. 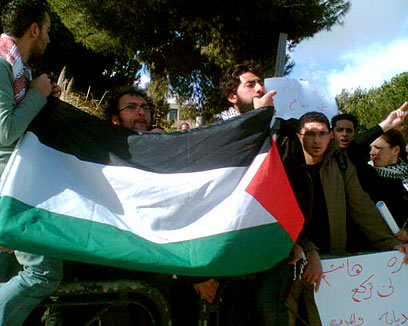 Officials hope graduates will become Hebrew teachers. Hamas has already begun offering Hebrew studies as an elective to ninth graders in 16 schools, and plans to expand the program to dozens of other schools in the coming months.

Israel occupied Gaza for 38 years after capturing it, along with the West Bank and east Jerusalem, in the 1967 Mideast war. Since withdrawing its settlers and troops from Gaza in 2005, Israel has fought two wars against Hamas and restricts access to the territory by air, land and sea.

The coastal strip still relies on Israeli-run crossings for most consumer goods, and Gaza patients must receive special permits to reach medical care in Israel or the West Bank.

Students need to "understand what's going on, like wars, medical treatment in Israel, in the West Bank," said the Education Ministry's Nakhala. 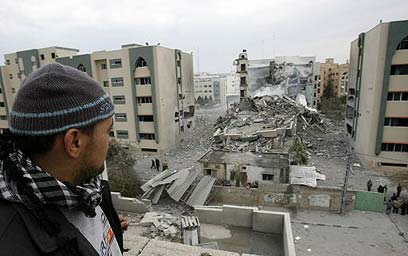 There is no shortage of Hebrew speakers in Gaza, at least among older residents. For years, Gaza Palestinians entered Israel to work in restaurants, construction and other menial jobs. Thousands of others learned the language while held in Israeli prisons. In quieter times, many Israelis would come to Gaza to fix their cars, bargain hunt or eat at local restaurants.

But after the outbreak of the first Palestinian uprising in the late 1980s, Israelis stopped coming. After a second uprising erupted in 2000, Israel sharply restricted the entry of Gazans. Since Israel's pullout and the subsequent Hamas takeover, direct contact between the sides is virtually nonexistent.

This tortured relationship with Israel was on display during Hebrew class this week at the Islamic University.

Two women, their faces veiled in line with conservative Muslim beliefs, practiced Hebrew in a doctor-patient dialogue. When the conversation turned to the chilly weather, another student described being cold while held in an Israeli prison because he wasn't given a blanket. "Saval maspik," he said in broken Hebrew. "Suffered enough."

Discussing medical terms, lecturer Kamal Hamdan and a student created a dialogue between Palestinian paramedics and Israeli officials, asking how many people were wounded in an Israeli military incursion into Gaza.

Hamdan noted the similarities between Arabic and Hebrew, which are both Semitic tongues. He pointed at parts of his body, calling out the words.

"Even if there's a difference in politics, culture, even if there is an occupation and oppression, the languages resemble each other," Hamdan told the students.

The conversation even delved gingerly into Zionism, Israeli life and history.

In discussing the Israeli health care provider, "Maccabi," Hamdan told the students the word referred to ancient Jewish rebels. That led to a discussion of the early Zionist hero Joseph Trumpeldor, who helped bring Jewish immigrants to Palestine and was killed in 1920 while defending a Jewish settlement.

Hamdan repeated a phrase attributed to the fighter as he died: "It is good to die for our country."

Studing to understand the news

Some students said they were studying Hebrew to understand Israeli TV and radio broadcasts, which are easily accessible in Gaza.

Ghada Najjar, 26, described her frustration at not understanding Israeli news broadcasts during the last major round of Israel-Hamas fighting in November. At the time, Israel pounded Gaza from air and sea, while Palestinian militants fired rockets toward cities deep in Israeli territory. "It's a weapon, even if it's not very powerful, to understand," said the mother of two.

Jihad Abu Salim, 24, said he began studying Hebrew after participating in a four-month coexistence program at New York University. "I felt it was my duty to learn more about their history, politics and culture," he said.

Palestinian students in Gaza face unique challenges to learning Hebrew. Because of Israeli restrictions, few will ever practice the language with native speakers.

Contact with Israelis is frowned upon in Gaza, where it angers many residents who have lost loved ones or suffered injuries in fighting.

A small group of Gaza residents, mostly traders and medical officials, regularly enter Israel for business purposes. However, Hamas bristles at other contacts, and the government recently banned Gaza journalists from working for Israeli media.

Some Gaza residents who communicate with Israeli friends on email or Skype say they shy away from discussing those relationships with others.

Memories of a peaceful time

Hostile attitudes have left veteran Hebrew-language teachers treading a careful line. Like most Gaza residents, they view Israel bitterly after years of conflict. But they also have memories of more peaceful times, when they could freely enter Israel to study Hebrew.

Instructor Jamal al-Hadad, 60, railed against what he called linguistic theft, noting the many Arabic words that have been incorporated into modern Hebrew. "Like they stole Palestine, they also stole our words," al-Hadad said.

Mixed attitudes are common on both sides of the Israeli-Palestinian divide. Arabic is supposed to be mandatory in Israeli high schools from 7th to 10th grade, but only about half of them teach it. In most cases, students take it for two years, according to the coexistence group Abraham Fund.

In Gaza, high schools stopped teaching Hebrew in the mid-1990s, after a Palestinian self-rule government took over civilian affairs. Last year, the Hamas government decided to bring the language back - an acknowledgment that Gazans need the language to deal with Israelis, a people they are intertwined with for the foreseeable future.

And while Hebrew had been offered as an elective at several Gaza universities, this is the first diploma to exclusively focus on the language.

"It has the potential to change world views," said Baskin. "Facebook, email, chatting, the whole world is open. You can't prevent contact if people want contact."