The Palestinian prime minister warned Sunday that his government could fail to meet its obligations to its people because of a cash crunch, and urged Arab countries to deliver on promised aid.

Salam Fayyad met with Arab League members to discuss ways to raise the $100 million they pledged earlier to his Palestinian Authority. Arab League chief Nabil Elaraby said seven countries have responded favorably, but he did not name them.

League foreign ministers meeting in Cairo decided to dispatch a delegation to the region to raise the funds the Palestinian government needs to make ends meet. The group would include the Elaraby, Fayyad, and the foreign ministers of Iraq and Lebanon.

Fayyad told The Associated Press last week that the authority's cash crunch has gradually worsened in recent years, reaching a point where the government is unable to pay the salaries of about 150,000 government employees. On Sunday, he told reporters that the situation may push more than 1.5 million of 4 million Palestinians into poverty. 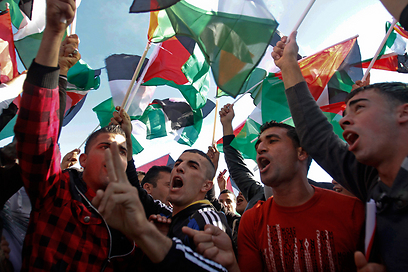 He warned that the financial crisis could lead to the disintegration of the Palestinian Authority.

"The absence of these funds threatens the Palestinian Authority's ability to carry out its obligations to the Palestinian people, including helping them stay in the territory," he said.

Fayyad said the Palestinian's successful bid in November to gain UN recognition for a state of Palestine has so far led only to Israeli punitive measures, including a halt to monthly transfers of about $100 million in tax funds the Jewish state collects on behalf of the Palestinians.

In a statement, the Arab League urged Israel to release those funds, and called on the international community to press Israel to do so.

Fayyad said those tax rebates amount to about one-third of the monthly operating costs of the Palestinian Authority. Fayyad said he now only takes in about $50 million a month in revenues.

Israel has said it used the withheld money to settle Palestinian Authority debt to Israeli companies, and it's not clear whether the transfers will resume.

The Palestinian Authority employs some 150,000 people, including civil servants and members of the security forces. About 60,000 live in Gaza and served under Palestinian leader Mahmoud Abbas before the Islamic terrorist Hamas group took over the strip in 2007, but continue to draw salaries even though they've since been replaced by Hamas loyalists.

In recent months, the government has paid salaries in installments. The Palestinian Authority relies heavily on foreign aid, and is already heavily indebted to local banks and private businesses.