According to Bloomberg, when informed of Israel's decision to expand construction in E1, American leader 'didn't even bother getting angry' and said Netanyahu moving Israel down path toward near-total isolation

Prime Minister Benjamin Netanyahu is moving his country down a path toward near-total isolation, US President Barack Obama said after Israel announced it would expand construction in the disputed E1 area shortly after the United Nations General Assembly voted in late November to upgrade the status of the Palestinian Authority to that of a non-member state.

According to Bloomberg, which quoted The Atlantic's national correspondent Jeffrey Goldberg, when informed about the Israeli government's decision to build additional housing units in the between Jerusalem and Ma'ale Adumim, the American leader "didn't even bother getting angry. He told several people that this sort of behavior on Netanyahu's part is what he has come to expect, and he suggested that he has become inured to what he sees as self-defeating policies of his Israeli counterpart.

Jeffrey Goldberg's report said that in the weeks after the UN vote, Obama said privately and repeatedly, "Israel doesn’t know what its own best interests are," adding that with each new settlement announcement, Netanyahu is moving Israel down a path toward near-total isolation. 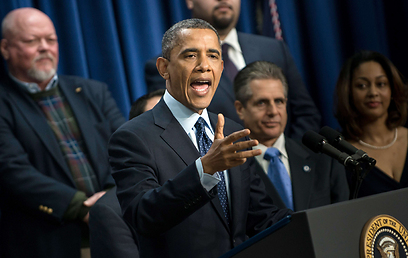 Goldberg wrote that "if Israel, a small state in an inhospitable region, becomes more of a pariah - one that alienates even the affections of the US, its last steadfast friend - it won’t survive. Iran poses a short-term threat to Israel's survival; Israel's own behavior poses a long-term one.

"On matters related to the Palestinians, the president seems to view the prime minister as a political coward, an essentially unchallenged leader who nevertheless is unwilling to lead or spend political capital to advance the cause of compromise," according to the Bloomberg reporter.

"Obama wants, in other words, for Netanyahu to act in Israel's best interests," he wrote. "So far, though, there has been no sign that the Israeli government is gaining a better understanding of the world in which it lives," said Goldberg.