Lapid vows not to serve as minister-without-portfolio

Yesh Atid Chairman Yair Lapid vowed on Tuesday that he would not serve as a minister-without-portfolio in the next government.

"The role described as 'a minister without a portfolio' is a symbol of moral and social turpitude. This phenomenon is making government ineffectual and wasteful and based on political extortion and corrupt manipulations," Lapid told a press conference, while adding that his commitment is binding for all members of his party.

"It mocks the general public that faithfully pays high taxes and in return gets a bloated and unworthy government," he said of the minister-without-portfolio position. "It is unreasonable that the government continues to raise taxes on the Israeli middle class, and at the same time spends millions of shekels on redundant ministries." 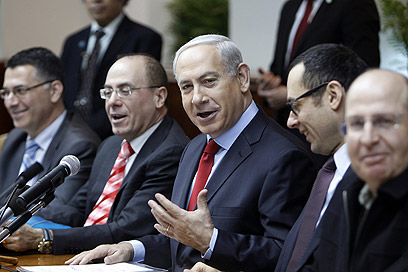 The Yesh Atid leader posted a petition on Facebook calling on leaders of other factions to commit not to serve as a minister-without-portfolio in any coalition, and calling on Prime Minister Binyamin Netanyahu not to give this post to members of the next government.

"Those who don't sign the petition will publicly allow political corruption that derives of personal interests, and the public should hold him responsible," Lapid told reporters.

"Whether or not (Yesh Atid) joins the coalition, this is an ethical commitment that must be made," he added.

Asked whether his party would join a Netanyahu-led coalition that includes Shas, Lapid said his party would "not serve as a fig leaf for a rightist government with rightists. We will not sit in such a government because it will bring disaster upon Israel."

The Labor Party issued a statement saying, "It is a shame that the only thing we are getting from Yair Lapid's political episode is a propaganda machine for Benjamin Netanyahu."