Prime Minister Benjamin Netanyahu woke up Wednesday morning to a complex political reality and now stands before a difficult task: creating a stable coalition. The fact that the joint Likud-Yisrael Beiteinu list was not successful in delivering the goods while parties like Habayit Hayehudi and mainly Yesh Atid managed to come as a bolt from the blue, will only harden the feat of forming a government.

Netanyahu has a few coalitional options before him; almost all of them are problematic. The first scenario and worst as far as he is concerned, is the formation of a narrow right-wing government including his natural partners: Habayit Hayehudi led by Naftali Bennett and the ultra-Orthodox Shas and United Torah Judaism. Netanyahu's relationship with Habayit Hayehudi and especially with its chairman Bennett and new MK Ayelet Shaked, will be influenced by the problematic relations the two have with Benjamin and Sara Netanyahu.

Likud and Habayit Hayehudi sources estimate that Sara will push to exclude Bennett from the coalition, but it is likely that coalitional considerations will override personal animosity and force Netanyahu to include Bennett in his government. Is Livni in or out? (Photo: Eran Yuppy Cohen)

A second scenario is the creation of a Right-Center-Left government (Yair Lapid's Yesh Atid, Tzipi Livni's Hatnua and Shaul Mofaz's Kadima) excluding the ultra-Orthodox parties. A coalition of this kind can promote civic issues like an equal share of the burden, civil marriage and allow Lapid, Lieberman and Bennett to further the enlistment of yeshiva students to the IDF. A coalition without the haredi parties will also punish Shas and namely one of its three leaders, Aryeh Deri, who conducted a harsh campaign against the Likud and Netanyahu. Still, sources close to Netanyahu say that he fears forming a coalition without the ultra-Orthodox, considered in his eyes and despite everything, natural partners and political allies. These sources also claim that Netanyahu is not interested in leading a move like that done by Ariel Sharon in 2003 and create a haredi-less government.

The best scenario for Netanyahu is forming an broad government with his natural right-wing partners and the Center-Left bloc. In this case, size could also be a disadvantage and Netanyahu will struggle to set common guidelines for all coalition members. 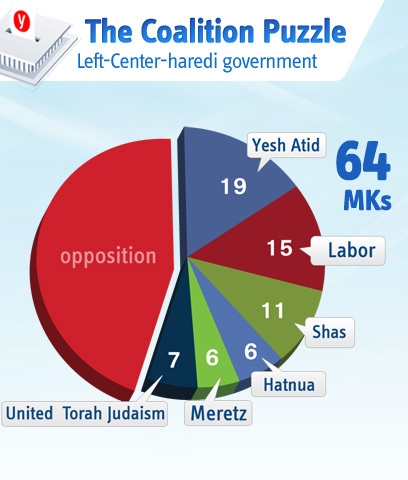 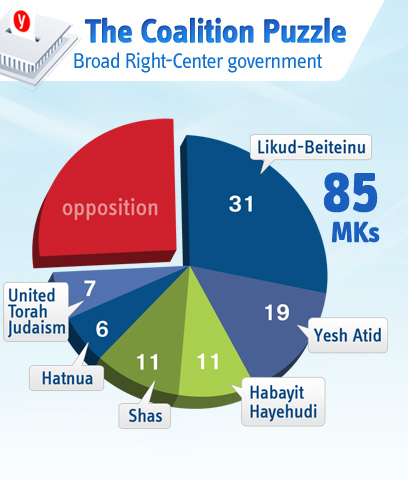 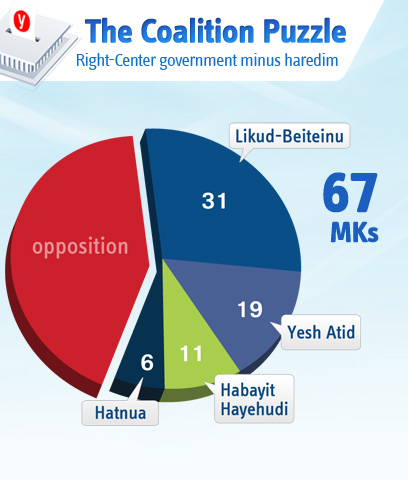 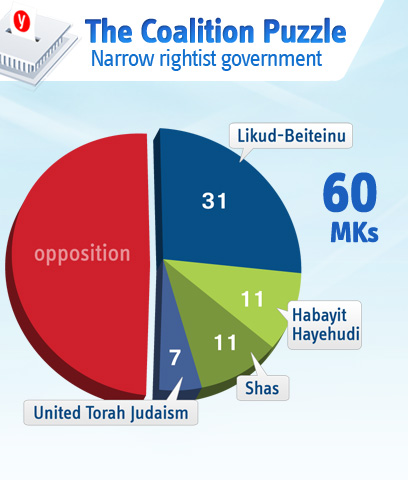 Livni announced that she will demand "a heavy political price" in exchange for her willingness to join the coalition and Bennett claims that negotiations with the Palestinians on the establishment of a Palestinian state will be "a catastrophe".

Livni also declared that the State of Israel needs a government "without Bennett." An additional option is to form a narrow right-center government; excluding Shas and Livni. Bennett will gain a coalition without Livni and political negotiations, Lapid will gain a coalition without the ultra-Orthodox. Furthermore, this is still a relatively fragile and unstable coalition and the polarity of its members is likely to cause crises pertaining to other issues. This scenario is quite the gamble for Netanyahu for he will then forsake his haredi partners.

"With the elections behind us, we can focus on taking action for the benefit of the citizens of Israel," Netanyahu said.

Labor Chairwoman Shelly Yachimovich and Hatnua Chairwoman Tzipi Livni called to congratulate Lapid on his party's achievement. Habayit Hayehudi Chairman Bennet also spoke with the Yesh Atid chairman and said afterwards: "We congratulated one another. Lapid is a good person."

Shas leader Eli Yishai said that he spoke with the prime minister and with the Labor leader and said that the three of them congratulated each other. Yishai sent a message to Yesh Atid's Lapid and said "if he wants a stable government, he will need to understand that we must work together."